WATKINS GLEN, Aug. 21, 2018 — A boil-water advisory that was due to expire today has been extended until at least Friday, Aug. 24, for the Village of Watkins Glen, the Town of Dix and the Town of Reading. 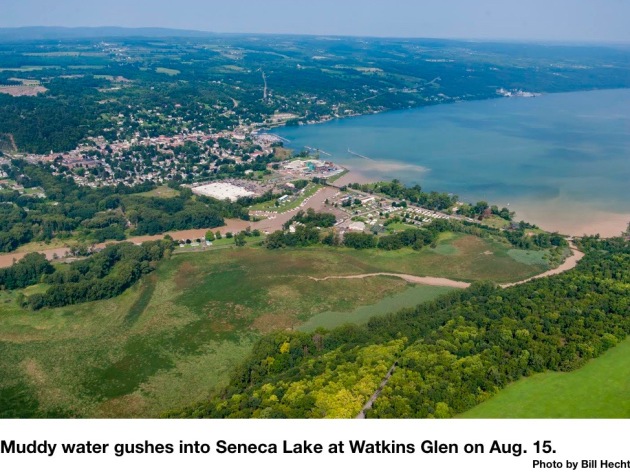 The warning not to use untreated tap water was imposed Aug. 16 after torrential rains — up to nine inches in 12 hours — caused major flooding, extensive property damage and rivers of cloudy runoff flowing into Seneca Lake.

State and local officials jointly issued the boil-water order after the lake water, the source of tap water for the three water districts, failed to meet a state threshold for turbidity. 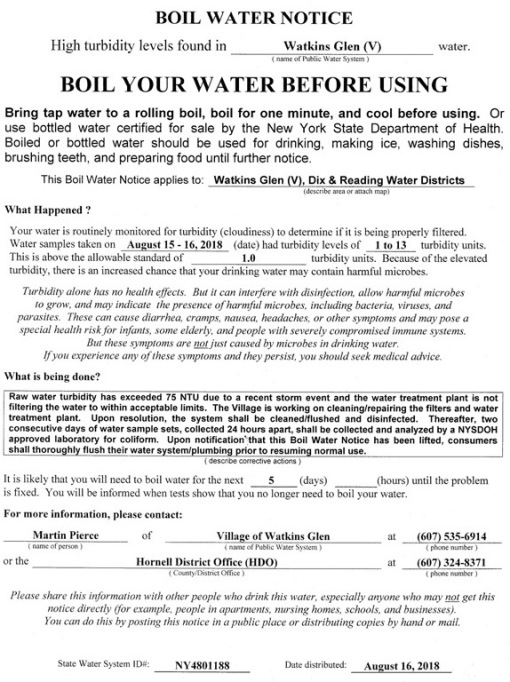 The village said on its website and on recorded phone messages Tuesday that it would be testing the water today. It said the test results would not be available for at least two days.

The advisory instructs residents to bring water to a rolling boil for one minute and cool before using for drinking, making ice, washing dishes, brushing teeth or preparing food.

The boil-water order forced the cancellation of a three-day rock concert festival by the Vermont jam band Phish, which had been expected to draw at least 30,000 people to the Watkins Glen International racetrack site.

The Phish festival, nicknamed Curveball, was set to begin Aug. 17. WGI President Michael Printup said the event had been expected to generate roughly $30 million in economic activity for the region.

Several outlets, including WENY and Phish.net, mistakenly reported that the boil-water order had been lifted Aug. 17.

Turbidity doesn’t necessarily have bad health effects itself. But it can and often does indicate the presence of harmful bacteria, viruses and parasites. These can cause diarrhea, cramps, nausea, headaches or other symptoms, according to the health department.