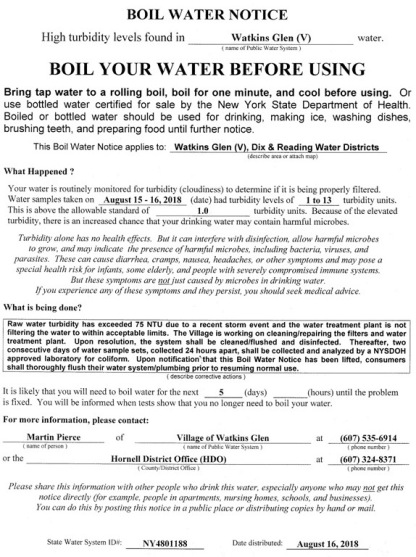 “A storm event like we had (Tuesday) will still cause a problem,” said Rick Weakland, project manager for the plant set to be built on an 8.6-acre site about a half-mile south of Seneca Lake on the Catherine Creek canal.

The plant, which will replace antiquated treatment facilities on the southern tip of the lake in Watkins Glen and on the canal in Montour Falls, will discharge its treated sewage wastewater into the canal rather than directly into Seneca Lake.

But it will not substantially ease the challenge Watkins Glen has of filtering lake water — the source of local tap water — that becomes excessively turbid due to runoff from extreme rainfall events. (The intake pipe for village drinking water is located on the lake’s southwestern shore, less than half a mile from the discharge point of the wastewater plant.)

After testing village water Aug. 15-16, state and local officials concluded that it was not being filtered sufficiently to meet state turbidity standards. On Aug. 16, they issued an order to boil tap water before using it for drinking, washing dishes or brushing teeth.

The boil-water edict forced cancellation of a planned three-day Phish rock concert festival set for this weekend at the Watkins Glen International race track. It was expected to draw at least 40,000. Those who’d arrived early to claim tent space were ordered to clear the racetrack property by noon Friday.

The Vermont band apologized to its disappointed fans.

“The four of us are writing this from directly behind the stage at Watkins Glen,” band members said in Aug. 16 statement. “We were about to walk onstage only moments ago for our traditional soundcheck jam for Curveball (the festival’s name) when we were told the heartbreaking news that due to the unsafe water conditions in the Village of Watkins Glen, our beloved festival is being canceled. 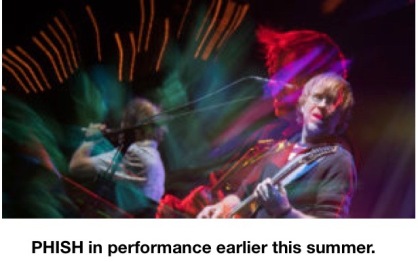 “We are still in shock. The entire site is already set up and ready to go after literally months of work by our beloved hardworking crew, many of whom have been here for weeks. Our families are here, our gear is set, our tents are up. We keep waiting for someone to come over and tell us that there is a solution, and that the festival can go on.  Unfortunately, it is not possible.”

For those stuck in Watkins Glen after the camper vans departed, the boil-water order was expected to last at least until Aug. 21.

Turbidity (cloudy water) doesn’t necessarily have bad health effects. But it can and often does indicate the presence of harmful bacteria, viruses and parasites. These can cause diarrhea, cramps, nausea, headaches or other symptoms, according to the health department.

The latest rainfall event — up to nine inches — wreaked havoc along sections of southeastern Seneca Lake, including Lodi, where Gov. Andrew Cuomo surveyed damage to docks, homes, roads and driveways.

In Montour Falls, the treatment plant on the canal was flooded, as was a marina nearby. But its tap water is drawn from wells, not the lake, and it didn’t receive a boil-water order. 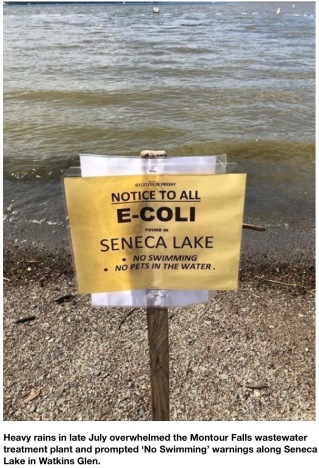 Less than a month earlier, another rainstorm dumped about seven inches on parts of Schuyler County, flooding the Montour plant’s wastewater lagoon.

The overflow into the canal triggered an E.coli warning for the canal and the southern end of Seneca Lake.

“In the last storm, the entire marina and plant itself were underwater,” King said. “That hasn’t happened since 1993. I’m a believer in climate change. These storms are going to be more likely.”

But King and Weakland acknowledged that the sewer systems can’t be completely protected in a massive storm. That means that even the new plant can expect to be overwhelmed at times.

Construction of the new plant’s main building is expected to begin later this fall, said Weakland, who is also president of Seneca Lake Pure Waters Association.

In recent months, the site on the edge of the Queen Catharine Wildlife Area has been transformed with fill to raise the base of the future plant several feet above the water level of the canal.

Planners initially intended to use pile drivers to sink footings for the building. They rejected that option due to prohibitive costs and to the likely disturbance it would cause a pair of eagles nesting nearby.

The process of preparing the site with fill is generally on schedule and on budget, Weakland said. However, recent rain events may lead to delays in the start of building construction later this fall, he added.

Even so, the plant should be ready for operation by next summer, Weakland predicted. King said he thought the start date might slip back to next fall.

Despite the construction disturbances, the eagles have stuck with their nest and even produced two fledglings earlier this year, according to Kate Bartholomew, chair of the Sierra Club Atlanta Chapter.

“Mom and dad are still in the same nest,” Bartholomew said. “They’ve survived Nascar and a couple of Italian-American festivals, so what’s a little construction noise?”