ITHACA, July 28, 2018  — Harmful algal blooms, or HABs, on Cayuga Lake have come earlier and more often than last summer, when confirmed outbreaks prompted an off-season ramp-up of shoreline monitoring and sample testing for the 2018 season. 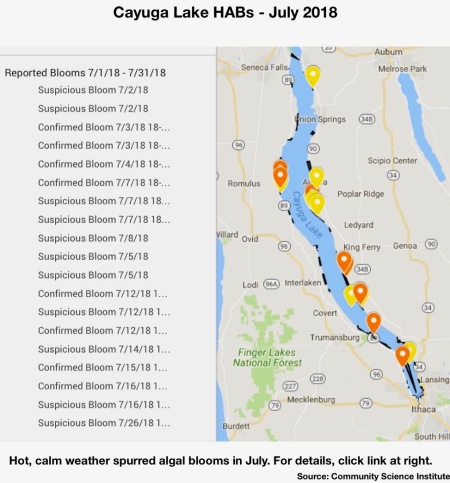 While none of the 21 algal bloom reports this month has been confirmed to contain high levels of toxins, three beaches were temporarily closed as a precaution — at Taughannock State Park in Trumansburg, the Wells College Dock in Aurora and Long Point State Park Beach immediately south of Aurora.

“We’ve seen far more (suspicious blooms), and earlier this year,” said Stephen Penningroth, director of the Community Science Institute in Ithaca. “Last year many of the suspicious blooms were not tested. This year is another story.” 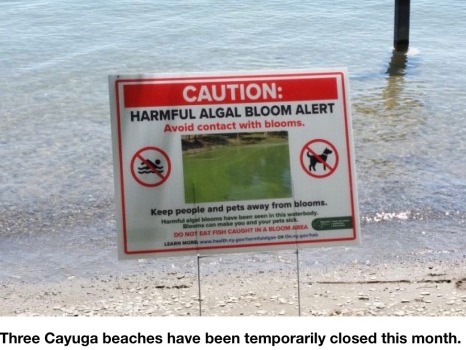 The most common type of cyanobacteria found in the Finger Lakes produces microcystin, a nerve and liver toxin. Exposure to it from swimming, drinking or breathing can cause irritation of the skin, eyes, nose and throat. Scientists are exploring links between HABs toxins and neurological diseases like dementia, Alzheimer’s, Parkinson’s and ALS (Lou Gehrig’s disease).

Dogs in particular are at risk because they are attracted to the toxins’ smell and can be poisoned by grooming after a swim.

CSI, a state-certified lab, tests water samples collected by volunteers on a 60-person team recruited within the past year to monitor the Cayuga shoreline.

The lab checks submitted samples of green-colored water under a microscope. Those deemed likely to contain cyanobacteria are divided in two, with one portion going to the state Department of Environmental Conservation for testing at the Upstate Freshwater Institute in Syracuse. CSI does parallel tests on the other portion.

The DEC classifies those with lab-tested chlorophyll levels above 25 micrograms per liter as “confirmed” HABs.

Samples with lab-tested levels of microcystin above 20 micrograms per liter are deemed to be “confirmed with high toxins.”

The treat of HABs has progressively worsened since 2012, when HABs were confirmed in only two of the 11 Finger Lakes. Owasco alone noted high toxins. 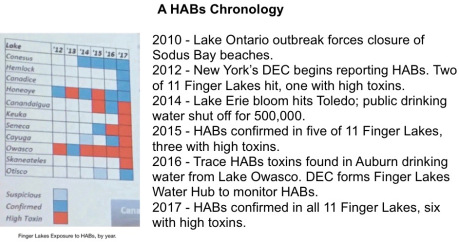 After trace HABs toxins were found in Auburn drinking water drawn from Owasco Lake in 2016, the DEC formed the Finger Lakes Water Hub to monitor and analyze the emerging threat.

Cayuga’s first-ever “high toxin” report (in the northwest section of the lake near Fayette) last September may have helped prompt CSI to create its 60-person team of lake monitors and expand its testing regimen.

Seneca Lake established its own team of volunteer lakeshore monitors a year earlier, perhaps because Seneca had experienced both its first confirmed HABs bloom (2015) and its first high toxin bloom (2016) a year earlier than Cayuga.

So far this year, HABs have been more frequent in Cayuga than Seneca — or at least CSI has provided more detailed monitoring and testing data than SLPWA.

As of that date, CSI had noted 21 HABs reports, including eight lab-confirmed blooms.

Cayuga’s first confirmed HABs sample for 2018 was taken July 3 near the Varick Romulus Townline Road on the northwestern shoreline. Others followed a half-mile south at Dean’s Cove and almost directly across the lake near Long Point. 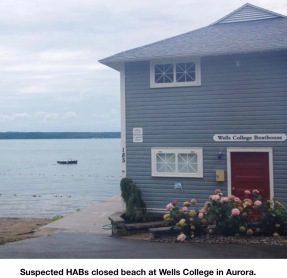 The following week other HABs were confirmed in Kings Ferry and Lansing Station Road, about midway up the lake’s eastern shore.

The following week, confirmed HABs were identified near Taughannock State Park and other locations.

Claire Weston, a HABs specialist at CSI, said her lab and the DOH have different testing priorities. Typically, the DOH tests water after a beach has been closed to see if it is safe to reopen. The closures are usually triggered by visual reports, not by DOH test results.

CSI, on the other hand, seeks evidence of active blooms — not evidence that the blooms have retreated. “We want green in the bottle,” Weston said.

Almost all of the suspected and confirmed blooms on Cayuga occurred during the hot, dry days in the first half of the month. Only one report has come since July 16.

Blooms are known to thrive in warm, calm weather when lake water is warm and full of nutrients, notably nitrogen and phosphorus.

Recent heavy rains have washed fresh nutrients into the lake from farms and overwhelmed water treatment plants. That could set the stage for another wave of blooms later in the summer if another the weather turns warm and calm, Penningroth said.

“It could make a difference,” he added. “Can we predict it will? No. I’m not aware that anyone can predict a harmful bloom.”

A public symposium on HABs is set for August 9 in Geneva, sponsored by the Finger Lakes Institute, Corning Inc., and the U.S. Green Building Council New York Upstate.