for the first time a small creek that runs near the Finger Lakes’ largest coal waste landfill.

“We are looking for offsite evidence of contaminants (from the landfill) in the stream and the lake,” said Hilary Lambert, who launched the initiative as executive director of the Cayuga Lake Watershed Network. 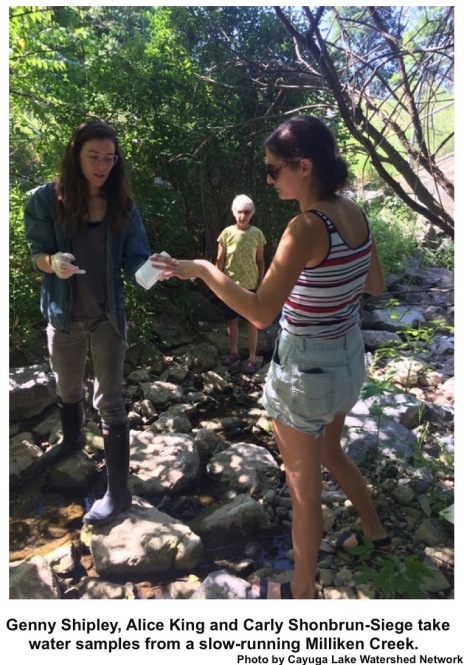 Groundwater samples from the company’s property on the eastern shore of Cayuga Lake about 12 miles north of Ithaca have long shown unsafe levels of various pollutants.

In 2010, The Cayuga landfill was one of 39 case studies highlighted in a landmark nationwide study of coal waste. Three years later, the federal Environmental Protection Agency confirmed that the site was contaminated, and its record of compliance with EPA limits has been spotty.

State and federal rules require the company to limit discharges of contaminants and to report on samples from on-site test wells. But the EPA watered down those rules July 17, and data on the effects beyond the property line are lacking.

Company officials have not responded to Lambert’s July 2 letter notifying them to expect to see water monitors in the creek just south of the plant’s property line.

The Milliken Creek monitoring program began three weeks after the company announced plans to convert one of its two coal-burning units to natural gas and to build an adjacent 75-acre solar farm. The plans call for the solar arrays to extend over a portion of the landfill just as the Trump Administration is easing regulation of coal wastes.

On July 17, Pruitt’s successor, acting EPA Commissioner Andrew Wheeler finalized a rule on how coal ash is stored at more than 400 coal plants across the country. Wheeler is a former lobbyist for Murray Energy, the nation’s largest coal company. Murray had pressed for an easing of the rules.

As reported in the Washington Post, Wheeler’s rule will allow a state to suspend groundwater monitoring if it determines that no migration of contaminants can be detected. While Pruitt’s version of the rule required a professional engineer to make that determination, the Wheeler version allows state officials to do so.

“These amendments provide states and utilities much-needed flexibility in the management of coal ash, while ensuring human health and the environment are protected,” said Wheeler said in announcing the finalized rule. “Our actions mark a significant departure from the one-size-fits-all policies of the past and save tens of millions of dollars in regulatory costs.”

The EPA estimated that industry will save $30 million a year on regulatory costs.

EarthJustice filed extensive critical comments on EPA’s plans to roll back the 2015 rules, and Avner Vengosh, a Duke University expert on coal waste landfills, told The Post that the rule could leave communities vulnerable because they lack data on whether pollutants have migrated to sources of drinking water.

The Milliken Creek samples were taken in exceptionally dry conditions this month. Further samples will be gathered in September and November, said Lambert of CLWN. “Keep in mind that it may take several years of testing to ascertain what’s going on,” she added.

Steve Penningroth, executive director of CSI, said: “We have the (July 12) samples and we’re in the process of analyzing them. We still have to decide which parameters to test.”

In addition to analyzing lake water samples for cyanobacteria, or harmful algal blooms (HABs), CSI analyzes water samples from several dozen tributaries in the Finger Lakes. It posts detailed results on its website. The data from Milliken Creek will be added as soon as it is available.

But the Milliken Creek samples are likely to undergo more extensive testing in order to determine whether pollutants are migrating from the landfill. Those additional screenings might include arsenic, selenium, lead, strontium and/or sulfate, all of which have been reported above safe levels in more than one company monitoring well.

For example, three monitoring wells on the southwest edge of the landfill have reported levels of selenium above government guideline levels.

That might raise concerns because Cayuga landfill leachate is discharged into Cayuga Lake.

While the Cayuga landfill reports to the EPA, it is also regulated by the state Department of Environmental Conservation.

The DEC said in a statement last week that the new federal rule announced by Wheeler won’t affect coal waste landfills in New York. “New York State’s landfill regulations, which were reaffirmed, updated, and strengthened in 2017, far exceed federal regulations relating to coal ash landfills. As such, this recent federal action does not affect the way coal ash landfills are strictly regulated in New York,” the DEC statement said.

The state regulates the Cayuga landfill under a Part 360 solid waste permit and a State Pollution Discharge Elimination System (SPDES) permit. The agency’s last full review of the Cayuga landfill’s solid waste permit was conducted in 2013, and the next one is scheduled for 2023. The plant’s SPDES permit, under which the state allows for discharges of landfill leachate into the lake, expired in December 2014 and has been “administratively renewed.”

Another Finger Lakes coal waste landfill, Lockwood Hills in Dresden next to Seneca Lake, entered into a 2015 consent agreement with the DEC to clean up its leachate by late 2016.

But at the request of that landfill’s owners, the agency has extended the cleanup deadline by more than three years, and the leachate continues to empty into the Keuka Outlet, a tributary to Seneca.

The Dresden plant recently converted from coal to natural gas power. The Cayuga plant is one of only two coal-powered plants left in New York State, and it plans to continue burning coal in one of its two units even if the other unit wins state permits to convert to natural gas.

Gov. Andrew Cuomo has set the goal of closing all coal plants in the state by 2020.

The Cayuga plant was acquired in 2016 by Riesling Power LLC, an affiliate of The Blackstone Group. The chairman of Cuomo’s 2018 election campaign, Bill Mulrow, is a senior official at Blackstone.

Cayuga plant manager Doug Roll and Jerry Goodenough of Heorot were not immediately available by telephone. This post will be updated if and when they respond to messages requesting a return call. Company officials did not respond to emails sent earlier.