LANSING, July 3, 2018 — An affiliate of the politically-connected Blackstone Group seeks to convert one of the two coal-fired units at its Cayuga Lake power plant to burn natural gas, hauled in by truck.

The plant, built in Lansing in the mid-1950s, is one of only two remaining coal-fired facilities still operating in New York State. Gov. Andrew Cuomo has vowed to convert or close all the state’s coal generators by 2020.

The Cayuga plant has been limping along with the help of massive ratepayer subsidies since a previous owner, AES, filed for bankruptcy in 2011.

The gas and coal units are each rated at just over 150 megawatts, while the solar farm would contribute 18 megawatts.

The company announced plans for its “energy park” June 21, winning praise from local politicians and economic development officials for preserving local jobs. Opponents, meanwhile, have raised concerns that as many as 60 trucks a day would deliver fuel to the newly installed gas unit.

The solar array would extend over a section of the plant’s coal ash landfill, a plan that fittingly coincides with the Trump Administration’s recent push to slash regulation of coal ash nationwide.

Riesling Power LLC of Easton, Md. bought Cayuga Operation Co., owner of the Lansing plant, and Somerset Operating Co., owner of the state’s only other coal plant (in Niagara County on Lake Ontario), for an undisclosed amount in early 2016.

At the time, Riesling’s prospects for turning a profit looked bleak and its strategy for doing so was unclear, given Cuomo’s publicly touted efforts to move the state away from coal and toward renewable energy. In fact, an independent analysis of Cayuga’s outlook, published in August 2015, found:

“There are less expensive, and far better, ways to achieve electric grid reliability and to maintain the local tax base and jobs and promote economic development than artificially propping up an uneconomic power plant.”

Since that report by the Institute for Energy Economics and Financial Analysis, transmission upgrades have rendered the Cayuga plant nonessential to the reliability of the electric grid, and its ratepayer subsidies of $4 million a month came to a halt in June 2017.

Adding to the mystery of Riesling’s resolve to continue operating the plant is its complex ownership structure that leads back to Blackstone, which employs William J. Mulrow, the chairman of Cuomo’s 2018 re-election campaign, as a senior managing director.

Blackstone, a Wall Street behemoth that manages $450 billion in assets, is run by its billionaire co-founder Steven Schwarzman, one of President Donald Trump’s most trusted and frequently consulted advisors. Schwarzman is a champion of the administration’s deregulation of finance and environmental protection.

In late 2016, Schwarzman recruited high-profile CEOs for Trump’s Strategic Policy Forum. He chaired the forum until it disbanded last August in the wake member CEO resignations over the White House’s tepid response to violent neo-Nazi protests in Charlottesville, Va.

Mulrow may be even closer to Cuomo than Schwarzman is to the president.

He took a big pay cut in January 2015 when he left his $1-million-a year-plus job at Blackstone to become secretary to Cuomo, the governor’s highest ranking aide.

When Mulrow left that post in April 2017 to return to Blackstone, Cuomo announced that he would be chairman of his 2018 campaign for a third term as New York governor.

Mulrow guides Cuomo’s strategy and fundraising, which is skewed heavily toward big donations. According to a New York Times analysis last year, more than 99 percent of his campaign funds come from contributions larger than $1,000.

More than a year after leaving state government, Mulrow still ranked No. 17 on City & State’s 2018 List of Albany’s most powerful, ahead of many with higher profiles, such as U.S. Sen. Kirsten Gillibrand.

Riesling’s connection to Blackstone, Schwarzman and Mulrow is not at all straightforward, and it is effectively camouflaged by an unpublicized corporate name change.

But it can be traced through public records from the Federal Energy Regulatory Commission, Moody’s Investor Service, the Federal Communications Commission and Bloomberg. Here’s what they show:

In its January 2016 approval of the sale of the Cayuga and Somerset plants to Riesling, FERC reported that “investment funds managed or advised by GSO Capital Partners LP currently hold 97 percent equity ownership interest in Bicent Power.” GSO, which has approximately $79 billion under management, is the credit-oriented business of The Blackstone Group, L.P.

Public references to Bicent’s change of name to Heorot are scant.

But a month after FERC gave its approval of the two power plant sales, a transfer of control application for Somerset was filed with the FCC by “Heorot Power Holdings LLC (F/K/A Bicent Power LLC).”

Bicent Power, which had filed for bankruptcy protection in April 2012, created Riesling before it was renamed Heorot.

Heorot is a subsidiary of Beowulf Energy LLC, also based in Easton, Md. Beowulf is the Old English epic, one of the classics of world literature. Heorot is a symbolically important grand hall in that saga.

Officials at Beowulf (Paul Prager, president; Douglas Halliday, COO.CFO) and and Heorot (Cayuga Plant Manager Doug Roll) did not return emailed questions about their plans for the Cayuga “energy park.” Minda Conroe, the designated contact on the press release that announced the plan, also did not return emails or phone calls seeking comment.

“Developing a large-scale solar farm while converting one of its coal-fired boiler units to natural gas is exciting news for Lansing and the entire Finger Lakes region,” Helming said in a statement. “This is a significant step forward not only for our environment – reducing air emissions and preserving our lakes – but also for our economy by employing local people to complete this project.”

But Judith Enck, a former regional administration at the U.S. Environmental Protection Agency, was critical and called for the state Department of Environmental Conservation to thoroughly analyze the conversion bid.

“There are enormous environmental issues at play in this conversion — everything from burning fossil fuels, to dealing with coal ash, to water quality — and they scream for a comprehensive environmental impact statement,” said Enck, an informal advisory to Cynthia Nixon, who is challenging Cuomo for the Democratic nomination for governor.

Enck noted that the State Environmental Quality Review Act requires permit applicants to consider alternatives. She said the DEC should not be embracing new investments in uneconomic fossil fuel plants, given Cuomo’s pledge to see the state draw 50 percent of its electricity from renewable sources by 2030.

The DEC also said the application does not involve the coal ash landfill because burning gas does not affect the landfill, which is regulated under a Part 360 solid waste permit. The last full permit review was conducted 2013. The next one is scheduled for 2023, the DEC said last week.

Cayuga’s coal ash landfill has polluted local groundwater and Cayuga Lake for decades. Millions of gallons of leachate and landfill runoff flow into the lake each year.

According to the website ashtracker, groundwater samples collected at the site between 2010 and 2015 contained unsafe levels of boron, arsenic, selenium, nickel, lead, cobalt, cadmium, nitrate, mercury and other dangerous substances.

The Cayuga site has a section that is lined and a section that is unlined, which accepted wastes until 1984 and is now closed, EIP reported. “Batch discharges” of coal ash leachate and landfill runoff from both totaled over 19 million gallons in 2008, the study said.

The EPA confirmed in 2013 that Cayuga was one of the nation’s most polluted coal ash sites. Two years later the agency began comprehensive regulation of coal ash dumps nationwide. 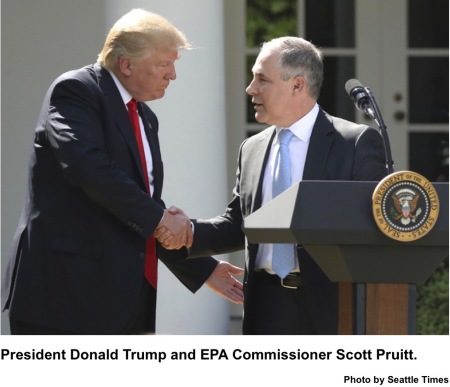 But the Trump Administration, under EPA director Scott Pruitt, moved in March weaken the oversight and enforcement called for by those 2015 rules. EarthJustice, among many others, filed objections to Pruitt’s measure.

A few months after the EPA enacted its federal coal ash rules, state regulators got tougher on a coal ash landfill in Dresden, next to the Greenidge power plant on Seneca Lake. In February 2016, the DEC entered into a consent agreement with the landfill’s owners that set an aggressive cleanup schedule.

That consent agreement schedule has since been dramatically relaxed, and the DEC has granted Greenidge’s owner permission to convert from coal to natural gas without requiring an environmental impact statement. Sierra Club has filed suits to challenge those permits.

While the DEC has not entered into any such consent agreement with the Cayuga landfill, environmental groups are likely to press the agency to require a full environmental impact statement on Cayuga’s proposed gas repowering.

If such an EIS is required, it would need to address the fact that the Cayuga power plant withdraws and discharges huge amounts of water from and to the lake without a modern recycling system.

Because the water it discharges is significantly warmed, it may contribute to a growing threat to the lake: cyanobacteria, also known as harmful algal blooms or HABs.

HABs are such a growing statewide menace that Cuomo has dedicated $60 million to study and control them at 12 New York lakes, including Cayuga.

Hilary Lambert, executive director of the Cayuga Lake Watershed Network, said her group is recruiting dozens of volunteers to monitor the lake’s shoreline this later this summer when blooms are expected.

Meanwhile, the Cayuga plant is authorized to discharge up to 245 million gallons a day of unrecycled heated water into the lake.

That authority comes from the plant’s State Pollutant Discharge Elimination System (SPDES) permit, which expired in December 2014. The DEC routinely allows industrial facilities to operate indefinitely under expired permits if they apply for renewal, a practice that has been labeled by critics as “zombie” permitting.

The agency said this week that the delay in issuing a new permit stems from the fact that the permit applicant submitted new information. It added: “DEC is currently undertaking a full technical review of the SPDES permit which will result in a draft new permit and opportunity for public comment.”

The DEC said the plant is under no legal obligation to install a system to recycle the water it uses to cool its machinery.

But in a 2011 policy statement, the DEC described recycling as a “best practice” and it said it would require all new power plants to use recycling systems, which can reduce discharges by up to 95 percent.

The agency has not entertained public discussion about whether recycling should be required for the coal-to-gas conversions completed at the Dresden plant on Seneca and proposed at the Lansing plant on Cayuga.

In two lawsuits challenging permits at Greenidge, lawyers for the DEC have urged the court to discount affidavits by Boyer, the HABs expert, concerning the likely link between hot water discharges and toxic algae. However, his affidavits remain a part of the case records.

Installing a recycling system at the Lansing plant would be a multi-million-dollar expense that would undercut the profitability Blackstone seeks for its investors.