ROMULUS, Dec. 23, 2017 — Felix Flores said he had no idea when he bought his Romulus home in August that plans were in the works to build the state’s largest waste incinerator roughly 3,000 feet away. 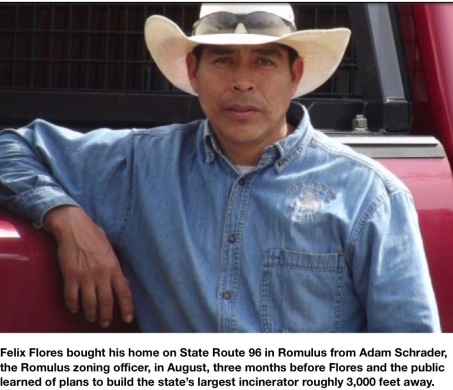 “I made my offer in June or July and paid almost full (asking) price,” Flores said in telephone interview Dec. 22. “It was a good location.”
Flores said he’d never met the seller, Adam Schrader, who didn’t attend the closing. Neither did Flores know that Schrader, the Town of Romulus zoning officer, had issued a controversial “interpretation” of local law months earlier that gave incinerator developers a chance to obtain a special use permit from the Romulus Planning Board.
In November, Circular enerG LLC went public with plans to seek such a permit to build a waste incinerator that would burn up to 2,640 tons of trash a day within the former Seneca Army Depot. It would feature at 260-foot smokestack and handle up to 238 trucks a day. Eventually, it could produce up to 50 megawatts of electricity.

Schrader had helped set the stage eight months earlier.
On March 16, he wrote a letter to Earl Martin and Michael Palumbo (now an incinerator proponent) stating — in response to their question — that a “waste-to-energy” project at the former depot would be classified as “Renewable Energy Production” and that it would not violate a local provision banning “noxious or injurious” use if it complied with environmental regulations.
Schrader supplemented those interpretations in a second letter to Martin and Palumbo on August 28, and those interpretations were memorialized in published public notices in May and September.
Without the “renewable” designation, the proposal would not be eligible for the special use permit, and it would face the all-but-insurmountable obstacle of winning a series of variances to the town’s strict zoning code.
Schrader’s conclusions have come under heavy fire following Circular enerG’s unveiling of its intentions.
“That’s his (Schrader’s) interpretation,” William Karlsen, vice chair of the Romulus Planning Board, said in an interview Dec. 22. “I’m going to say that interpretation is not correct. The Planning Board and the Zoning Board of Appeals will have their vote on that.” 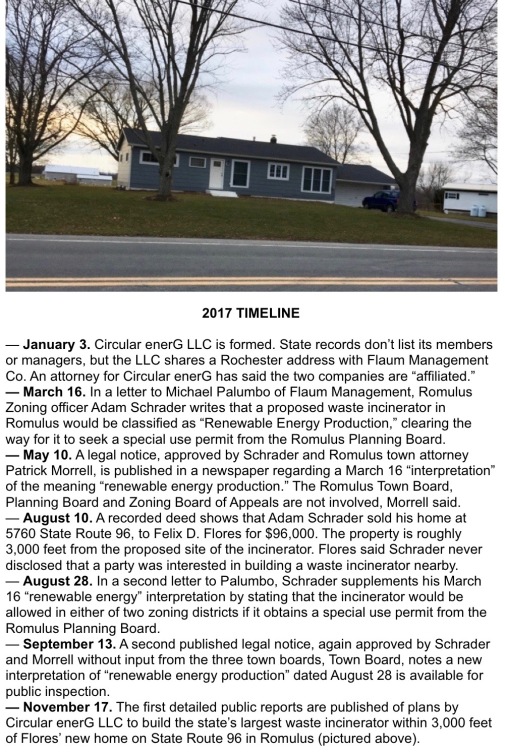 Two days earlier, Willard Burns, an attorney from nearby Ovid, urged the Romulus Town Board to flatly reject the incinerator proposal as a clear violation of several provisions in the local zoning code. The board deferred to the Romulus Planning Board, which is reviewing the special use permit application.
Burns argued that Schrader has no legal authority to rule on what is “renewable energy” under the local zoning code. His authority applies to enforcement, not interpretation, he added. It is the Zoning Board of Appeals that “shall clarify doubt as to the precise meaning of any word used in this law.”
But Alan Knauf, Circular enerG’s attorney, said the “renewable energy” question is settled. “The town’s already ruled on that,” Knauf said.
The public notices may have established that. They were prepared by Schrader and Patrick Morrell, the Romulus Town Attorney, without input from the Romulus Town Board, the Planning Board or the Zoning Board of Appeals, Morrell said in an interview Dec. 22.
Asked whether Schrader’s interpretations were now binding on the town, Morrell said he had not yet decided.
By awarding “renewable energy” status to a proposed waste incinerator, Schrader did what the state of New York has long refused to do, notably in high profile cases in 2004 and 2011.
In 2011, Covanta, which owns or operates seven of the 10 waste incinerators in New York State, sought to have waste incinerators included in the state’s “Renewable Portfolio.” Environmental groups howled in protest and Covanta’s bid was denied.
The state Department of Environmental Conservation “(did) not take a position directly on the merits of Covanta’s petition” to win “renewable” status.
But it did provide detailed testimony on the significant air pollution created by waste incinerators in New York. For example, the DEC found that waste incinerators generated “up to 14 times more mercury than the coal plants when these two sources provide the same amount of electricity.” They also emit lead, dioxins and other potent carcinogens, the agency noted.
Burns, the Ovid lawyer, said Schrader’s conclusion that waste incinerators are not “noxious” is not supported by the plain meaning of the word.
“The Merriam Webster dictionary’s main definition of ‘noxious’ is ‘physically harmful or destructive to living beings,’ and it gives two examples: ‘noxious waste’ and ‘noxious fumes’,” Burns wrote in a Dec. 18 letter to the Romulus Town Board and Planning Board. 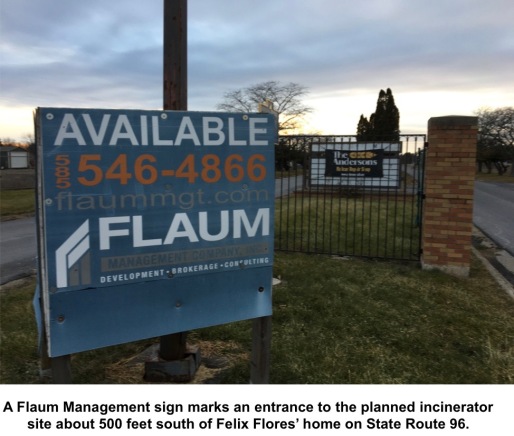 Schrader could not be reached for comment at his office Friday. He did not respond to a voice message left on his personal cell phone.
Flores said Schrader did not disclose the prospect of a waste incinerator during sale negotiations this past summer. He said he was not happy about that omission. He said he and his wife planned to actively oppose Circular enerG’s waste incinerator bid.
Deed records show Flores paid $96,000 for his property August 10, providing Schrader a 60% gain on his 2012 purchase price of $60,000.
Records also show Schrader has moved to Alpine, about 35 miles south of Romulus.