Town of Romulus Planning Board Overruled

State regulators are contesting a bid by officials in the Town of Romulus to seize the crucial “lead agency” role in analyzing a proposal to build the state’s largest trash incinerator at the former Seneca Army Depot because potential environmental impacts “are not primarily local.” 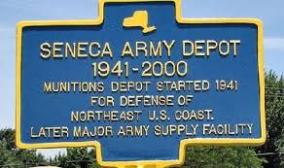 The lead agency has legal authority to establish the scope of the environmental review given a project, including whether to allow or cut off public participation.
The $365-million Romulus project, proposed by a secretive LLC with no track record in waste incineration, has intense opposition in Romulus and across the region. The Finger Lakes Wine Business Coalition has spoken against it, and the Geneva Town Board has passed a resolution in opposition.
Geneva’s action came after the Town of Romulus Planning Board stated Dec. 6 that it intended to assume the lead agency role under the State Environmental Quality Review Act, or SEQR. But it was effectively overruled Wednesday by the state Department of Environmental Conservation.

In a Dec. 20 letter to Planning Board Chair Thomas Bouchard, the DEC’s Scott Sheeley wrote that the DEC planned to take the lead agency role — unless the state Public Service Commission asserts its right to oversee the project.
The PSC regulates electric power generation. If it steps in on the grounds that the incinerator plans to generate more than 25 megawatts of power, the project review would be exempt from SEQR, Sheeley said. If the PSC doesn’t step in, the DEC intends to take control, he added.
The Romulus Planning Board has until Jan. 20 to contest the DEC’s stance.
The plant, which would feature a 260-foot smokestack, would accept up to 2,640 tons of garbage a day. That’s nearly half the volume limit at the state’s largest landfill in Seneca Falls, 11 miles to the north.
Even before the Romulus Planning Board, the DEC and the PSC decide the jurisdictional question, the Town of Romulus could simply reject the project as a violation of its zoning laws, according to an attorney from nearby Ovid.

Willard R. Burns, the attorney, noted in a Dec. 18 letter to Romulus officials that Romulus zoning law prohibits:
— “The storage, processing or transloading of any waste materials, except for food processing or agricultural waste and marketable recyclable materials….
— “Open burning of rubbish, garbage, treated lumber or other materials causing noxious odors, residue or fumes.”
Burns told the Town Board Dec. 20 that it had no need to spend money on a lawyer or engineer to study the incinerator proposal. He said it could simply declare it an unacceptable zoning violation and kill the project.
Town Supervisor David Kaiser acknowledged that the explicit zoning language Burns cited was added in 2015 after the Cuomo Administration proposed the former Seneca Army Depot as a place to send refuse left behind by Hurricane Sandy.
But Kaiser said the Town Board was deferring to the Town Planning Board on Circular enerG LLC’s request for a special use permit for the trash incinerator.
Circular enerG, which is associated with Flaum Management in Rochester, has taken steps to neutralize potential snags created by the zoning law.

In March, Michael Palumbo of Flaum Management obtained a letter from Town of Romulus Zoning Officer Adam Schrader stating the proposed incinerator would be classified under Romulus Zoning Law as “Renewable Energy Production.”
As a result of that classification, the Schrader letter stated, “the facility would be an allowed use if a special use permit was approved by the Romulus Planning Board.”
On Aug. 28, Schrader wrote a second letter to Palumbo and Earl Martin of Seneca Dairy Systems that added that the incinerator would not be prohibited under the zoning law as “noxious or injurious” so long as it complies with environmental regulations.
Burns argued to the Town Board Dec. 20 that Schrader lacked authority to issue those determinations. He said the zoning law assigns interpretation of the zoning law to the Zoning Board of Appeals, not the zoning officer.
Pat Morrell, attorney for the Town of Romulus, declined to say whether Schrader’s letters were binding. He said he would need to research the law.
But Alan Knauf, attorney for Circular enerG, said he doubted Schrader’s conclusion that the incinerator qualified as a “renewable energy” project could be seriously challenged. “It’s a strong claim,” Knauf said in a telephone interview Dec. 20. “It’s already been decided. The town’s already ruled on that.”
New York State does not recognize the energy generated from burning waste as “renewable” energy, despite lobbying efforts by the incinerator industry to have it qualify.

In 2011, Covanta asked the state to include so-called waste-to-energy plants in its Renewable Energy Portfolio. But environmental groups rose up in opposition and the effort failed.
Covanta owns or operates seven of the 10 waste incinerators in New York State. The company gave Knauf a tour of its plant in Niagara in November. At a Romulus Planning Board meeting Dec. 4, an official from a Covanta-operated incinerator in Onondaga County invited board members to tour its facility. 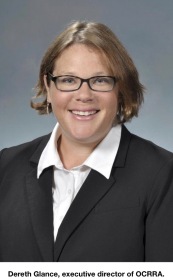 The invitation was issued by Dereth Glance, executive director the Onondaga County Resource Recovery Agency, or, OCRRA, which owns the plant that Covanta operates. She did not return a phone call this morning to explain her interest in the Romulus proposal.
Knauf said he wasn’t aware that Covanta also operated the Onondaga facility.
When asked if Covanta might invest in or operate the Romulus plant, Knauf said: “We are not associated with Covanta, although you did make a good suggestion that they might be an operator. They’re not a sponsor of (Circular enerG’s) project.”