That’s how the state Department of Environmental Conservation brushes off its proposed modifications to Cargill Inc.’s permit to extract salt from its gigantic mine from leased state land under Cayuga Lake.

The changes proposed July 29 would formally bar Cargill from mining near specific geologic “anomalies” — weak rock formations — that may put the structural integrity of the entire mine at risk.

For years, independent geologists have warned that bedrock separating the mine from the lake runs dangerously thin in northern sections of the mine (photo above). They say that as miners continue to push north, a catastrophic breach grows increasingly likely.

The DEC’s “housekeeping” amendments belatedly acknowledge that risk, at least in part, by explicitly banning mining near three anomalies, including one at Frontenac Point.

Oddly, the agency proposed the permit changes just a few weeks ahead of scheduled oral arguments before a state appeals court in a lawsuit alleging that the DEC illegally permitted Cargill’s mining northward to proceed without an environmental impact statement.

Last Spring, a judge in Tompkins County dismissed the case brought by the City of Ithaca and other towns, the group CLEAN (Cayuga Lake Environmental Action Now), and several individuals. That triggered the appeal (and formal responses to that appeal from Cargill and the DEC).

Normally, appeals courts don’t even consider new information that wasn’t part of the trial court record. But exceptions are made in extraordinary situations.

This may be one of those.

On Aug. 27, an attorney for the city asked the appeals court to “take notice” of the DEC’s proposed permit amendments.

A day later, Associate Justice Sharon A.M. Aarons, left, of the state Appellate Division, Third Judicial Department, ordered lawyers for Cargill and the DEC to explain on Sept. 3 why it shouldn’t take notice.

Oral arguments on the appeal are set for Sept. 10.

At issue is the permit the DEC issued Cargill in 2017 to drill a 2,500-foot elevator shaft in Lansing, called Shaft No. 4, to connect to the existing mine.

Cargill needed the new shaft to continue drilling northern sections of the mine because because existing shafts are too distant from that work to meet federal mine regulations. Miners must be able to evacuate within one hour, and they needed another escape route.

“To the extent that mining continues north … , construction of a new air shaft … would ultimately be necessary as a part of the plan to continue operations at the Cayuga Mine,” Cargill attorney John F. Klucsik wrote the DEC in early 2015.

“Cargill’s relationship with DEC is much too cozy. DEC must break from years of caving to Cargill on each under-the-lake mine expansion.”

Even so, the DEC ruled that the Shaft No. 4 project and the mining of Cargill’s northern reserves should be regulated separately. So the mine’s thinning bedrock and the risky geologic anomalies were deemed irrelevant the the agency’s permitting process for the shaft.

For decades, Cargill has opposed an EIS for its Cayuga salt mine, and the DEC under four different governors has never required one. Meanwhile, the agency has required Cargill’s chief competitor, American Rock Salt in Livingston County, to conduct two.

The City of Ithaca sued to block the Shaft No. 4 permit over the lack of an EIS, but it lost in Tompkins County Supreme Court. Acting Supreme Court Judge John C. Rowley accepted the Cargill/DEC argument that the agency had properly separated its reviews of Shaft No. 4 from an analysis of mining the northern reserves.

“To now require review of the two projects together defies logic and a reasonable interpretation of the law,” Rowley wrote in his April 29, 2019 order.

It wasn’t the first time that DEC had championed — and courts later endorsed — the notion that portions of the Cargill’s Cayuga mining enterprise could be segmented for regulatory purposes in service of the company’s keen desire to sidestep an environmental impact statement.

Although “segmentation” is prohibited in the State Environmental Quality Review Act, the Cuomo Administration’s DEC has allowed Cargill to segment three related projects and waived an EIS for each one:

— A 150-acre salt mining tunnel under dry land in Lansing that now connects the mine to Shaft No. 4, permitted in 2015.

In approving the mine tunnel, the DEC represented to the public in its Environmental Notice Bulletin that it was simply a small mining project.

“All activities associated with the with the modification will take place underground, and there will be no additional surface development associated with this proposal,” the ENB stated — disingenuously, many believed. Cargill had purchased the site at the end of the tunnel three years earlier.

Only days after the statute of limitations had run out for challenges of the tunnel approval, Cargill applied for the mine shaft permit, asserting that its proposed access and ventilation shaft project was separate from its mining operations.

The tunnel and shaft projects were key to continuing work at the Lansing salt mine Cargill had acquired in 1970.

The state, which owns Cayuga Lake and the land under it, has given the company the right to mine about 13,400 acres, mostly under the southern third of the lake. Northern sections of those reserves, which haven’t been tapped yet, are seen as riskier to mine. 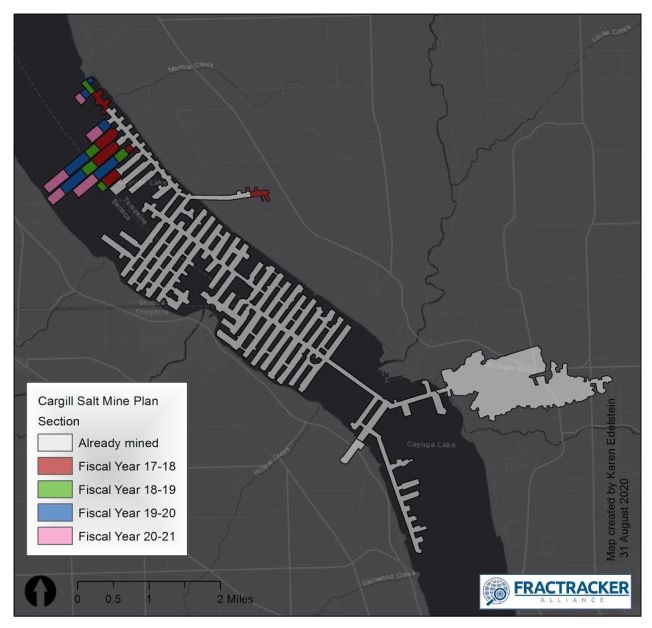 Independent scientists have warned of geologic similarities between portions of the Cargill mine and the former Retsof mine in Livingston County, which collapsed and flooded in 1994, creating giant sinkholes, buckling roadways and ruining an aquifer.

A leading expert on the Retsof collapse, Geneseo geologist Richard Young, has warned that mining salt under Cayuga Lake is a “bad idea.” 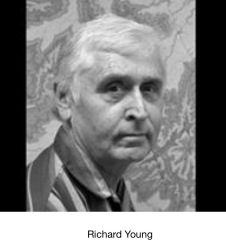 Noting the ominous Retsof precedent and citing Young, two members of the New York Assembly — Barbara Lifton (D-Ithaca) and Steve Englebright (D-Setauket) — called for a moratorium on salt mining under Cayuga Lake in 2017, weeks before the DEC issued the permit for Shaft No. 4.

Englebright, a geologist who chairs that chamber’s Committee on Environmental Conservation, reiterated in an Ithaca radio station interview last year, his concerns about a potential repeat of the Retsof disaster at the Cayuga mine.

Mining under the lake is “fraught with uncertainties,” he said. He also expressed concern about breaking up a project for regulatory purposes to avoid an EIS.

“The whole idea of fragmenting potential harm is counter to the way in which SEQR is designed,” Englebright told a WRFI interviewer. “It’s designed to prevent segmentation,” which he said was “specifically prohibited.”

For William Hecht, a party to the City of Ithaca lawsuit now before the appellate court, Cargill’s longstanding efforts to avoid an EIS dovetail with its successful efforts to have seismic and geological information withheld from public view.

“My bottom line is that’s state land,” said Hecht (above). “They’re keeping secret information about a resource on state land. It isn’t (Cargill’s) property. This is yours and my property.”

In 2002, Hecht launched a three-year campaign to try to pry loose data on the mine that the DEC had agreed to protect as Cargill’s confidential “trade secrets.”

He filed a Freedom of Information Law request for withheld or redacted data. Resolving that request caused division at high levels within the DEC.

The agency’s chief administrative law judge, James McClymonds, and another ALJ concluded Cargill failed to carry its burden of proof that key data deserved confidential treatment as “trade secrets.” They recommended that the agency release data it had been withholding on those grounds.

“Strong policy considerations support the release of information in this case,” McClymonds and ALJ Susan J. DuBois, wrote in November 2003. “Shielding from public scrutiny the very information necessary to assess the potential environmental impacts associated with a proposed mine is inimical to that process.”

However, their ringing endorsement of Hecht’s call for transparency in the Cargill case was largely overturned 20 months later. Hecht never got many of the documents McClymonds viewed as release-able.

In a final July 2005 ruling in the long-running FOIL battle, Assistant DEC Commissioner Louis Alexander ordered many documents to remain under seal.

Fifteen years later, it is the Ithaca group CLEAN that has taken the lead in calling on the DEC to release key documents related to the safety of the Cargill mine, including confidential Cargill seismic studies in 2016 and 2019.

“Cargill’s relationship with DEC is much too cozy,” the group’s website says. “DEC must break from years of caving to Cargill on each under-the-lake mine expansion.”