ROMULUS, Nov. 20, 2018 — Groundwater drawn from three sites at the former Seneca Army Depot is contaminated with the potent carcinogens PFOA and PFOS at levels of up to 1,327 times the federal health advisory limit.

Officials do not yet know the extent of the plumes of underground pollution, but the state Department of Environmental Conservation said the U.S. Army will begin additional “site investigation” in the early spring.

Despite the potential magnitude of the problem and the state’s ongoing PFOA crisis in Hoosick Falls, the Seneca Depot case is not widely known.

When informed of it, Robert Hayes of Environmental Advocates of New York said: “Communities across New York may have these dangerous chemicals in their drinking water and not even know it.”

Hayes said Gov. Andrew Cuomo should immediately direct the state Department of Health to establish strong maximum contaminant levels and widespread testing for the chemicals. “The longer the governor waits, the greater chance that people will get sick,” Hayes added.

The most contaminated Seneca Depot site, a former fire training pad named SEAD25, lies about 1000 feet west of a row of apartments on East Patrol Road and 4000 feet southwest of the Romulus Central School — both of which rely on public water systems.

But several farms and homes near the polluted sites rely on private water wells that could be exposed to plumes. The state Department of Health said in a statement Monday that it sampled water from 22 of those private wells in April and that none of the samples exceeded the federal health advisory limit.

The use of firefighting foam is thought to be the source of the contamination.

The Department of Defense uncovered Seneca Depot’s pollution problem during an investigation launched two years ago into 664 military sites nationwide that used firefighting foam. At the depot, it took samples from the fire training pad, a fire training pit area and an airfield refueling site.

PFOA and PFOS are among a class of chemicals called perfluorinated compounds, or PFAS, once widely used as components in foams made to control petroleum infernos such as plane crashes. Though mostly phased out today, they may still be used in some foams, the DEC says.

The water supply for Hoosick Falls, a town of 3,400 about 30 miles northeast of Albany, was discovered to be contaminated by leaks from the former Saint-Gobain Performance Plastics plant.

The DOH reported last May that it found no statistically significant increase in the types of cancers associated with PFOA exposure. But more recently, canvassers working in a Bennington College survey found 31 incidences of kidney cancer, 11 cases of testicular cancer, 231 people with thyroid disease, 71 incidents of ulcerative colitis and 35 cases of pregnancy-induced hypertension, WAMC reported.

A federal official with the U.S. Environmental Protection Agency was first to warn Hoosick Falls residents not to drink the local water. That was in October 2015. The Cuomo Administration followed up with an action plan several months later.

That panel was required by state law to recommend stringent state thresholds for toxic chemicals in drinking water within one year. It never happened. The council was silent as the deadline passed last month.

That inaction drew stinging editorials. Noting that PFOA and PFOS can be easily filtered with carbon, Newsday wrote: “Federal and state regulators need to set real standards to meet this emerging problem head-on. No more delays.”

The EPA now requires water systems serving at least 10,000 people to test for PFOA and PFOS, or perfluorooctane sulfonate, when, in combination, they exceed 70 parts per trillion in water samples.

Some environmental groups say the threshold is too high and the targeted areas too narrow.

“So smaller communities have avoided testing, and their pollution problems (remain) in the shadows,” said Hayes of Environmental Advocates. “Hoosick is a good example …. It took the initiative of a resident to test his water and discover the contamination.”

Army testing of the fire training pad site (SEAD25) began in April 2017 under the supervision of the contractor Parsons. It looked for PFOA, PFOS and 12 other related chemicals in samples from 12 wells. It found evidence of 12 of the 14 chemicals.

At the fire training pit site (SEAD26), samples from all eight tested wells exceeded the EPA standard, though by far less than the SEAD25 samples. The maximums were 240 ppt for PFOS and 580 ppt for PFOA.

Samples taken at the airfield refueling site (SEAD122E) had traces of 12 of the 14 screened-for chemicals. And PFOA was detected in samples from 13 wells, while PFOS was found from one well — but all at levels below the EPA limit.

The results from the airfield refueling site were a relief to Randall Battaglia, environmental coordinator at the Seneca Army Depot for the DOD’s Base Realignment and Closure (BRAC) initiative.

In a June 7, 2017 email to EPA and DEC officials, Battaglia wrote of the airfield wells:

“I would like to urgently close the wells, remove the casings and grout the well location. Seneca Ironworks Inc. is the company purchasing the bulk of the property, including the airfield; a 200-employee factory is planned at the former airfield. The factory will use the county water system and not groundwater…

“Although out of our normal process, I request your urgent concurrence with unrestricted development at the airfield.”

But SEAD25 and SEAD26 pose other problems for property owners and developers because so many of the water samples from those sites exceeded the EPA contamination limit. 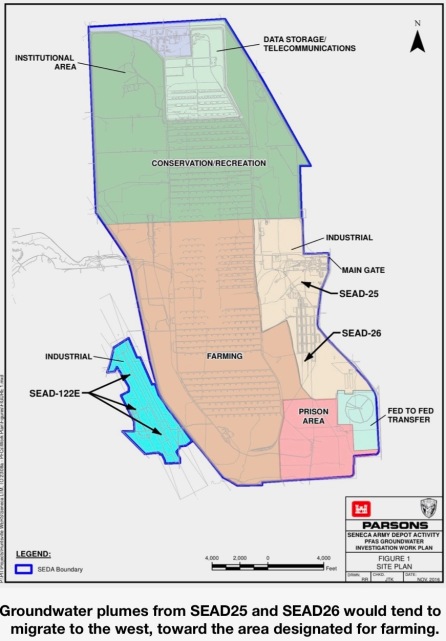 In fact, several nearby properties are being (or will be) used for farming.

“To the west, and downgradient of SEADs25 and 26 is the section of the depot that has been designated for future farming use,” the DEC’s Melissa L. Sweet wrote in a Nov. 9, 2017 letter to Robert Aronson of the Seneca County Industrial Development Authority.

“To our knowledge,” the letter continued, “the current tenant, upon taking ownership, plans to subdivide the property and sell for farming use.

“Those people taking ownership could potentially be exposed to concentrations of PFOS and PFOA that exceed the USEPA health advisory level should they install drinking water wells and if the contaminants traveled in the groundwater to that section of the depot.”

Sweet went on to say that the DEC would ask the Army to study the pollution plumes that may originate at SEAD25 and/or SEAD26.

“Upon completion of that investigation, a remedy will be determined and implemented,” she said in conclusion to her letter to Aronson.

While state and federal officials do not yet know the extent of the migration of PFOA and PFOS from SEAD25 and SEAD26, groundwater tests from those specific sites in 2007 suggest that it is likely that one or more plume has developed.

That year, Parsons tested groundwater for other contaminants, including benzene, toluene, BTEX and others (not PFOA or PFOS).

In January 2017, the U.S. Government Accountability Office (GAO) reported on the Department of Defense’s efforts to clean up environmental contaminants, including chemicals from firefighting foam. The study concluded that the military should obtain and share more information.