A proposed $30 million wastewater treatment plant in Watkins Glen has cleared its biggest environmental and financial hurdles and is now back on track to begin operating by mid-2019. 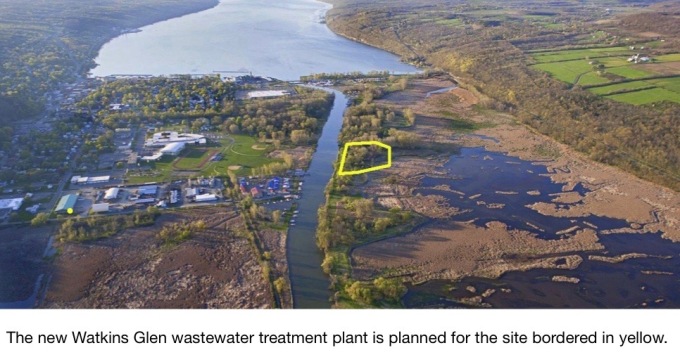 The new facility on the canal linking Watkins Glen and Montour Falls will serve both villages, replacing their existing antiquated treatment plants and freeing up valuable real estate on Seneca Lake’s southern shore.
Aside from its role in improving water quality at the southern end of the lake, the new sewage treatment facility is seen as key to Watkins Glen’s ambitious revitalization plans. 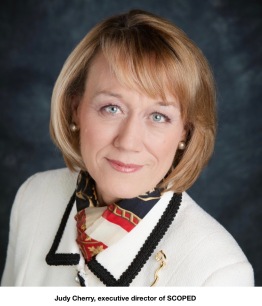 “The wastewater plant is the cornerstone for all economic activity in and around Schuyler County — residential, commercial and industrial,” said Judy Cherry, executive director of Schuyler County Partnership for Economic Development. “It is vital.”
Cherry is also co-chair of a Downtown Revitalization Initiative for Watkins Glen that recently won a $10 million state grant. Figuring out how to best reuse the current wastewater plant’s 1.35-acre site is a primary goal of the DRI.
The new plant will be built about 3,000 feet south of the lake on the canal’s east side. Its 8.6-acre site sits on the border of the Queen Catharine Wildlife Management Area, a specially-protected marshland.
Early on, the project hit a serious roadblock when a pair of eagles were found to be nesting nearby.
In response, local officials built an optional new nest for the eagles at the southern end of the marsh. While the eagles haven’t swapped nests, they have begun defending the new nest from ospreys and other potential competitors, according to John King, mayor of Montour Falls.
In addition, plant developers have bought for preservation a private 20-acre parcel south of Owasco Lake where another pair of eagles now nest.
They also agreed to refrain from any noisy construction work at the plant site before Oct. 1 to respect the breeding season of endangered long-eared bats.
After those and other mitigation steps were taken, state Department of Environmental Conservation on Oct. 13 awarded the proposed treatment plant all five of its necessary permits.
Meanwhile, the first round of contract bidding for the project — bids were advertised in April and opened in June — didn’t go according to plan, forcing design changes and a new round of bidding.

“The bids came back $6 million high,” said King, chair of a joint wastewater committee made up of officials from both villages. “So we put together a plan to cut $3 million from the design and we applied for $3 million in additional grant money.”
The main money-saving design change involves the elimination of pile-driving, which came to be seen as too expensive, noisy and time-sensitive. Because of the eagles, pile-driving would have been restricted to a three-month period beginning in October. Missing that late-Fall window would have meant delaying the project for an entire year.
Instead, fill material will be brought to the construction site and compressed to provide stability and raise the surface elevation four feet for flood protection, said project manager Rick Weakland.
Switching from pile-driving to compressed fill is expected to cut at least $2.5 million in costs, King and Weakland said. The precise amount of savings won’t be known until bids are opened and accepted.

Advertisements for new bids on the site plan were published earlier this month. They will be opened Nov. 1.
Ads for separate bids on plant construction are expected to be published in December and opened in January. Ads for bids on forced main sewer lines and pump stations will go out in the spring, King said.
“So we’ve conquered the eagle issue. We conquered the long-eared bat issue. When we open the latest bids, we hope to have conquered the budget issue,” he added. “And we’ve moved the scheduled startup back to mid-2019.”
The disappointingly high first-round bids prompted project planners to turn to engineers at Haley Aldrich, Barton & Loguidice and the Larson Design Group to look for design savings. Those consultations led to the decision to scrap pile-driving in favor of compressed fill, Weakland said.
The project will be financed by a combination of state grants and loans. That includes more than $18 million in loans from the state’s Clean Water State Revolving Fund. In addition to $7 million of grants in hand, project planners have applied this year for an additional $2.5 million grant from the state Water Quality Improvement Project.
Modernizing sewage treatment in Watkins Glen is expected to benefit water quality at the southern end of Seneca Lake. The current plant is antiquated, and it has repeatedly failed to meet required standards for discharges into the lake, leading to state fines in 2012 and 2014.
Switching to a more modern facility on the canal will cut the amounts of phosphorus, chlorine and other pollutants poured into the lake. And it will greatly increase the distance between the discharge pipe at the plant and the intake pipe for Watkins Glen’s public drinking water system on Salt Point Road, only a half mile away.
“Historically, water has always been the lifeblood of this community,” Cherry said. “Seneca Lake has to be kept healthy.”

Cherry’s downtown revitalization initiative is weighing a variety of options for redevelopment of the old site. One possibility would include apartments or condos, a restaurant, a swimming pool and a theater.
The sewage modernization project will come at a price, King acknowledged. He noted that Montour Fall’s sewage rates have been rising steadily and will continue to rise to fund the new plant’s construction and operation.
In Watkins Glen, average sewer rates have risen about 70 percent since 2010. Effective in July, the minimum charge (for 0-2,250 gallons) was $22.75, up from $13.26 in 2010, a 71.6% increase.
Despite that upward trend, King said he did not expect sewer charges for either jurisdiction to rise above state averages.
Not everyone is satisfied that state and local officials sufficiently addressed environmental issues raised by the decision to build the plant in the marsh area, which Schuyler County had designated in 2010 as a state “Critical Environmental Area,” or CEA.
“It is the wrong place for such a plant and I abhor the methods used to pick that site,” said John Gregoire, an ornithologist in Burdett. “Politics and cronyism appear to have trumped science.” 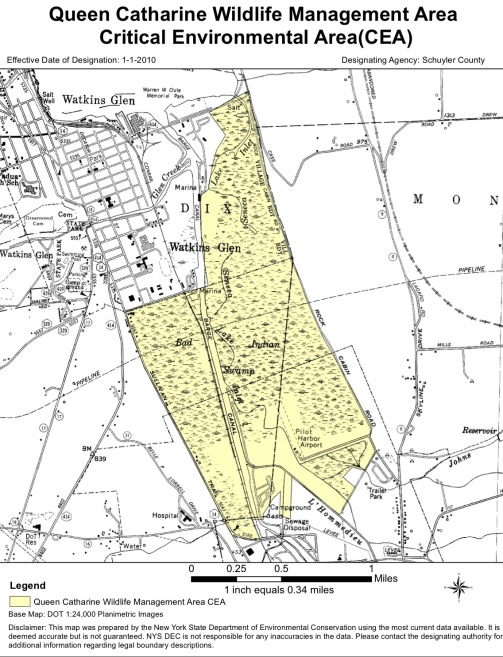 In January 2015, Watkins Glen trustees voted unanimously for a resolution declaring “the project will result in no significant adverse impacts on the environment.”
That so-called “negative declaration” meant developers could skip a full environmental impact statement, which includes public proceedings. Instead, the village prepared a less rigorous “environmental assessment form” with limited or no public participation.
Under DEC rules, Critical Environmental Areas require special treatment: “All actions of any state and local agency that affect a designated CEA area do require careful reasoned documentation and explanations regarding the impact on an area of important environmental concern.”
Village officials said that “field studies” at the site showed that the project would not hurt populations of “least bittern, pied-billed grebe, long-tailed salamander, marsh horsetail, nodding wild onion …” and other species.
Gregoire said he was never consulted in that analysis despite his role as principle author of the environmental section in Schuyler County’s Comprehensive Plan.
But DEC officials concluded that the village’s “negative declaration” was valid, and the agency endorsed its “field study” analysis when it granted the project all necessary permits.