AUBURN, July 16, 2020 — The routine use of chlorine as a disinfectant in public drinking water across the Finger Lakes generates toxic chemical byproducts well above levels that recently triggered alarms in Europe over their links to bladder cancer.

Four of the most troubling byproducts are known as trihalomethanes. The federal maximum contaminant limit for a combination of the four — total trihalomethanes, or TTHMs — is 80 parts per billion.

Earlier this year, five small  water utilities near Auburn, all of which draw raw water from Owasco Lake, sent letters informing their customers that their annual TTHMs exceeded the 80 ppb limit.

Those small systems are part of a broader regional pattern.

More than a dozen other Finger Lakes water systems — including those serving Canandaigua, Geneva, Ithaca, Penn Yan and Watkins Glen — have reported quarterly TTHMs of more than 100 ppb at least once since 2012, according to data from the Environmental Working Group, a non-profit watchdog based in Washington, D.C.

And several of the largest systems in the region reported average annual TTHMs levels above 40 ppb in 2019.

While TTHMs aren’t anywhere near as high an immediate health threat as tap water pathogens like e.coli, long-term exposure has been repeatedly linked to bladder cancer.

In January, a major scientific study covering 26 European countries  (see map below) concluded that more than 6,500 annual cases of bladder cancer — nearly 5 percent of all cases in Europe — can be attributed to trihalomethanes in drinking water. In countries with higher contamination levels, TTHMs were held responsible for up to 30 percent of all bladder cancer.

That study, co-authored by 30 scientists affiliated with ISGlobal in Barcelona, Spain, calculated that TTHMs averaged 11.7 ppb in European drinking water

By contrast, U.S. drinking water averages more than twice that level — 24.9 ppb — according to a study EWG issued in March.

EWG estimated that trihalomethanes in drinking water cause 6,800 extra bladder cancer cases per year in the U.S., roughly 10 percent of all U.S. bladder cancers.

The New York State Department of Health has long been alert to the health threat of trihalomethanes, and another class of toxic chlorine byproducts, haloacetic acids, or HAAs.

For many years, DOH has required all water utilities to disclose levels of TTHMs and HAAs in their mandatory annual water quality reports issued to the public. And if any system’s TTHMs average more than 80 ppb over four consecutive quarters, the DOH requires system operators to send special notices to customers within 30 days.

“Although this is not an emergency, as our customers, you have a right to know what happened,” the Cayuga County Town of Brutus wrote in a DOH-required letter to public water drinkers in January. 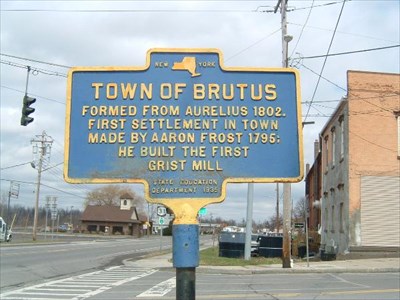 The letter explained that customers didn’t need to boil their tap water or stop drinking it.

“No immediate action is required or necessary,” it said. “If you wish to take further precautions, however, you can use bottled water or use individual household (carbon) filters certified to remove trihalomethanes.”

The Cayuga County towns of Fleming, Springport, Aurelius and Montezuma sent out similar letters notifying customers that, like Brutus, their average annual TTHMs fell with the 80-94 ppb range.

Raw water drawn from Owasco Lake is initially filtered and disinfected with chlorine by the Town of Auburn before it reaches the five small systems that sent letters to their customers.

“Drinking water is disinfected by public water suppliers to kill bacteria and viruses that could cause serious illnesses,” the letters state.

The World Health Organization endorses that point, underscoring that disinfecting drinking water with chlorine “is of unquestionable importance.”

WHO acknowledges that the disinfection process creates harmful byproducts, including trihalomethanes, but adds: “The risks to health from the by-products are extremely small in comparison with the risk associated with inadequate disinfection, and it is important that disinfection efficacy not be compromised in attempting to control such byproducts.”

The Barcelona study of triaholmethanes in Europe, published in January by Environmental Health Perspectives, begins by stating that drinking water disinfection “is essential for public health protection against waterborne infections.”

However, the use of disinfectants — mainly chlorine — has the unintended consequence of creating unhealthy byproducts — mainly TTHMs and HAAs. The study focused on TTHMs.

It found that the 26 European countries had an average of 11.7 ppb TTHMs, far below the European Union’s maximum contaminant limit of 100 ppb.

A survey of water systems in and around the Finger Lakes region shows that quarterly TTHM reports commonly exceeded both the European average of 11.7 ppb and the U.S. average of 24.9 ppb, as cited by EWG. Details for the years 2012-2017 were spelled out in an earlier report by EWG. 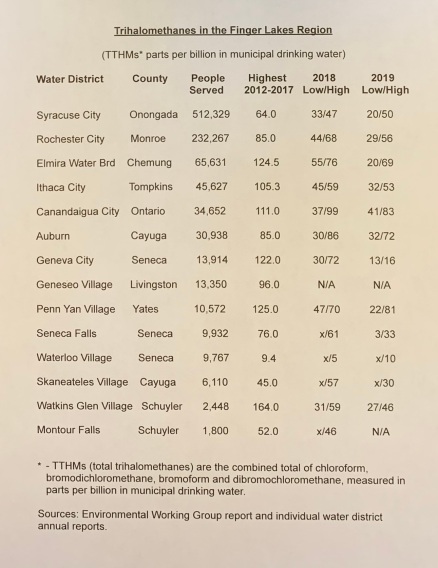 A few quarterly readings in 2019 exceeded the state’s 80 ppb limit. If they had persisted at that level on average for a full year, the DOH would have required letters to water customers.

In 2014 the Village of Penn Yan reported quarterly TTHMs numbers ranging from 22 ppb to 125 ppb.

The City of Geneva water system reported quarterly readings as high as 118 ppb in 2015 and 122 ppb in 2016, before dramatically reducing its levels more recently.

The Seneca County Village of Waterloo has consistently reported some of the lowest trihalomethane readings in the Finger Lakes. It switched from using chlorine as a disinfectant to other somewhat more expensive products that trigger fewer TTHMs.

The Village of Watkins Glen reported one quarterly TTHMs of 164 ppb in 2012, but has performed far better since then.

Watkins Glen serves approximately 2,500 water customers. But it also supplies water to other small water districts in the towns of Dix and Reading that have been repeat TTHMs limit violators.

For six of the past eight years, Dix, with about 200 water customers, has had at least one quarter of TTHMs above 108 ppb. The EPA has cited it for triaholmethane violations in three different years.

“The Village (of Watkins Glen) district and its purchase water systems in the town of Reading and Dix must work together to address disinfection byproducts,” a consultant wrote in a December 2019 report that recommended more than $15 million in upgrades to the water system.

The consultant criticized the village’s indiscriminate use of chlorine in Seneca Lake itself in a partially successful effort to kill zebra and quagga mussels that tend to clog the system’s raw water intake pipe.

The Village of Watkins Glen has been criticized for applying chlorine directly to Seneca Lake to kill zebra mussels that clog its water intake pipe. The village’s chlorine room, only a few feet from the lake, is shown at right.

“A problem with pre-chlorination is that chlorine is applied to water where it contains the highest concentration of natural organic matter, which reacts with chlorine to form harmful disinfection by-products,” the MRB Group wrote. “Installation of a copper-based intake screen in conjunction with a lower chlorine dose could significantly reduce disinfectant byproducts (including trihalomethanes).”

Despite the fact that Finger Lakes water systems produce TTHMs at rates significantly above the European and U.S. averages, the region has not been a particular hotbed for bladder cancer, according to the state’s highly detailed cancer registry.

Based on the latest data (from 2012-2016), overall bladder cancer incident rates in Seneca and Yates counties fell below the state average. Cayuga, Tompkins, Livingston, and Monroe counties were only slightly above the state average. 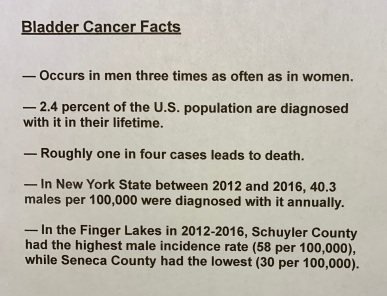 Only Ontario and Schuyler counties were substantially higher than the state average.

When comparing bladder cancer incidence rates among men — bladder cancer is three times more likely in males than females — Schuyler and Seneca counties were the region’s outliers. The state average in 2012-2106 was 40.3 cases per year per 100,000 men. In Schuyler the rate was 58, while in Seneca it was 30.

But bladder cancer rates are influenced by a host of other factors besides disinfectant byproducts. Factors like smoking may be even more influential.

The bladder cancer rates and lung cancer have followed roughly similar trajectories, declining slightly in recent years as the prevalence of smoking has fallen off.