The governor’s proposal bypasses a consultant’s confidential recommendation in October to sever the canal in Rochester and Rome to block the migration of nasty aquatic invaders from reaching the Finger Lakes and other key waterbodies.

Stiff local opposition to cutting off or impeding boat traffic on the 360-mile waterway connecting the Hudson River and the Great Lakes helped push the idea to the back burner.

A Cuomo task force charged with “reimagining” uses for the 195-year-old canal was split on the issue of severing the canal, which the panel — with one exception — agreed should be “studied further.”

One task force member “questioned the potential economic impact of complicating the journey for the long-distance boaters who transit those two (Rochester and Rome) points along the canal.”

Another said that forcing through-boaters to resort to “portage, ‘dry lock,’ or boat lift mechanisms, would tend to undermine the Erie Canal’s global brand reputation as a continuous water passageway.

But others “questioned how the state could justify not seizing the opportunity to prevent the spread of invasive species,” including Asian carp and other fish, Zebra and quagga mussels and vegetation like hydrilla.

For the time being, Cuomo has decided to let the controversy simmer.

In his Jan. 6 announcement laying out part of his 2020 State of the State agenda, the governor proposed spending the $300 million on the canal over five years.

“When the Erie Canal was created in the 19th century it set the state and the nation on a path to prosperity, and this year we will repurpose the canal to fit our state’s 21st century needs,” the governor said. 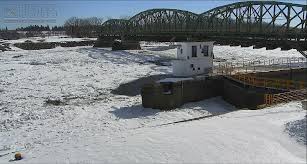 More than half would be spent this year: $100 million on an economic development fund and $65 million to tackle flooding and ice jams near Schenectady.

Part of the 2020 economic development money would fund a whitewater rafting course at the north end of Cayuga Lake near Seneca Falls and four other projects in Brockport, Canastota, Amsterdam, Canajoharie. 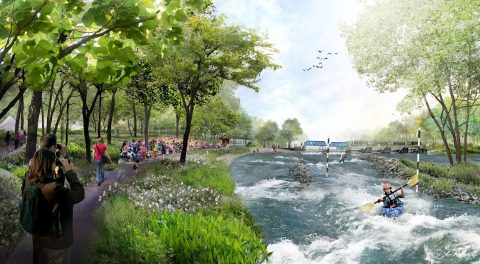 The remaining $135 million not specifically earmarked to be spent this year would go toward other “efforts to prevent invasive species, flood mitigation and ecosystem restoration.”

The Finger Lakes region stands to benefit directly from the wetlands and irrigation initiatives.

For example, the state proposes to divert canal water and restore old hydrological connections around the Galen Marsh near Clyde and the Montezuma National Wildlife Refuge just north of Cayuga Lake.

The goal is to re-nourish wetlands that were disturbed when the canal was built many decades ago. The effort is intended to enhance the migratory stopover zone for more than a million birds and perhaps spur ecotourism.

Diversion of canal water will also allow for an irrigation infrastructure program to help protect farmers in western New York and the Finger Lakes from drought during the critical summer growing season.

Drought in the summer of 2016 resulted in an average crop loss of 43 percent across of swath centered in Livingston, Ontario and Seneca counties.

“Absent irrigation,” the task force report said, “farmers have a difficult time growing high-value crops such as apples and vegetables. These crops require a significantly higher investment in time and labor than low-value crops like feed-corn and soybeans. Hence, a guaranteed water supply is crucial for farmers to commit the investment needed to grow apples and vegetables.”

The report cited the success of a major irrigation program in Southwest Michigan, where irrigated acres more than doubled between 1982 and 2013. “Today the value of crops per acre (in that Michigan region) is almost double that of the rest of the state,” it stated.

While programs for wetlands and farmers are up first, the work on canal infrastructure to deal with invasive species will wait.

Compromises need to be hammered out between environmental interests and the through-boaters and the communities they help support.

The task force noted that many invasive species have already reached the Finger Lakes, including the water chestnut plant and zebra mussels.

But new threats are “at the doorstep,” including the Asian carp, which swims in the Mississippi River Basin and is now threatening to spread into the Great Lakes.

“Any invasive species in the Great Lakes can, and likely will, travel into the internal waters of New York State (i.e., the Finger Lakes) unless preventive measurers are taken.”

The confidential report, written in October, was first reported by the Buffalo News. It was written by R2 Resource Consultants Inc. for the New York Power Authority and BuroHappold Engineering, which NYPA hired to handle its “Reimagine the Canals” project. See the state’s YouTube video here.

R2 sought to identify ways that changes in Erie Canal infrastructure could slow or stop the spread of aquatic pests. The study didn’t attempt to weigh competing interests, such as the impacts on canal navigation.

— Severing the canal in Rochester “to protect the Finger Lakes and Oneida Lake from invasive species coming from Lake Erie.”

— Severing the canal at Rome “to protect the Mohawk and Hudson River Estuary from threats coming from the Great Lakes.”

— Establishing a boat lift/wash station in Oswego “to prevent threats from moving from Lake Ontario to Oneida Lake and the Finger Lakes.”

— Installing a bio-acoustic fish fence near Tonawanda “to deter Asian carp flowing into the canal from Lake Erie.”

Meanwhile, Cuomo wants NYPA to approve his $300 million five-year proposal at its next board meeting on Jan. 29.