Once pristine Skaneateles Lake, the drinking water source for Syracuse, had been spared from HABs all summer — until the first week in September when nine suspected blooms were spotted, including a cluster of four in the Village of Skaneateles and another mid-lake.

Likewise, Seneca Lake had an easy July and August before volunteers reported 16 suspicious green patches last week. Of the six of those that were lab-tested, all were confirmed blooms and potentially dangerous.

Cayuga Lake, which led the Finger Lakes in confirmed HABs and “high-toxin” blooms during July and August, got no relief Labor Day week. Its northern shores had three more “high-toxin” blooms that were dozens of times the state’s contamination limit for swimming and other lake recreation (and up to 600 times the drinking water limit).

For Owasco and Canandaigua lakes, HABs are a clear and present danger to public drinking water sources. In 2016, HABS-contaminated tap water drawn from Owasco reached thousands of homes in Cayuga County, prompting the installation of a granulated activated carbon filtering system in 2017 in the village of Owasco.

And last October, the state DOH ordered the town of Rushville to shut off its public water system after tap water samples there were found to have been contaminated with HABs toxins from Canandaigua Lake.

HABs are misnamed because although they may look like algae, they are not algae at all. They are various kinds of cyanobacteria. The most common type in the Finger Lakes is microcystin.

Their blooms appear as discolored water (usually green), often like spilled paint or filmy streaks or floating scum. They tend to show up on warm, calm days in the late summer and early fall.

The agency regularly closes swimming beaches based on solely visual evidence, even before the water is tested for toxins.

Exposure to bloom toxins can trigger a variety of symptoms, including skin rashes and vomiting. Dogs have died from playing in bloom-contaminated waters, typically after suffering convulsions, paralysis and difficulty breathing.

Responding to the fact that HABs have become a regular occurrence in recent years, the state Department of Environmental Conservation has launched an interactive map showing suspected and confirmed HABs across the state.

The map color-codes the most recent bloom events, but it does not highlight those that are found to have high toxins.

Here’s a look at how each of the 11 Finger Lakes have fared with HABs this summer, through Sept. 7, starting from the west:

— Hemlock. Four blooms, none in September. Two blooms were confirmed, including one with high toxins on Aug. 20. The high-toxin bloom developed at the  northern end of the seven-mile lake, which is the primary source of Rochester’s drinking water. The bloom did not affect the city’s tap water, in part because its intake pipe extends 1,600 feet from shore.

— Canadice. No blooms had been reported by the DEC as of Sept. 7 on the smallest of the Finger Lakes. It is a secondary water source for Rochester.

— Honeoye.  21 blooms, three in September, including two confirmed. The second smallest of the Finger Lakes (4.5 miles long) is also the shallowest and among the weediest.

A mechanical aquatic weed harvester, which Ontario County makes available to local boat owners, stirred up controversy in August when nine boats lined up to block its passage. The protesters argued that the contraption stirs up sediment and promotes algae growth. County officials say there’s no evidence to back that up. Lake bottom sediment is said to produce 93 percent of the lake’s phosphorus content, which fuels blooms.

— Canandiagua. Roughly 30 blooms, including eight suspicious blooms (none yet confirmed, but test results pending) in September. In August, five blooms in the lake’s northeast quadrant were confirmed with high toxins. That raises fresh questions about the ability of the six public water systems that draw from the lake to effectively filter the toxins from public drinking water.

The largest system, serving the town of Canandaigua, has never had its drinking water contaminated. But the other systems rely on less sophisticated filtering and may be more vulnerable. For several days last summer, the residents of Rushville were ordered by the state Department of Health to stop drinking their tap water. Tests results had shown tap water microcystin contamination above 0.3 ug/L, the state limit for children, the elderly and people with compromised immune systems. This summer the DOH has ordered several swimming areas closed for extended periods.

— Keuka. Six suspicious blooms, including one in September. Five of the six reports came in August, within one mile of Penn Yan on the northern tip of the lake’s eastern arm. In early August, three swimming areas — Indian Pines, Red Jacket, and the Keuka Lake State Park — were closed by the state DOH due to suspicions of blooms.

— Seneca. More than suspicious 40 blooms were shown on Seneca Lake Pure Water Association’s interactive map, compared with only 11 on the DEC’s map, reflecting a lag time in state posting SLPWA’s activity. Spared for most of July and August, Seneca got clobbered in early September, when more than three-quarters of the suspected blooms were reported to SLPWA.

Of 16 reports of suspicious green water turned in by volunteer lake monitors on Thursday, Sept. 5, only six were sent to the Finger Lakes Institute in Geneva for tests. All six were confirmed blooms (at least 25 micrograms per liter of blue-green chlorophyll). As in previous years, the lake’s shallower northern end has tended to be most vulnerable, particularly around Kashong Creek south to Dresden on the western shore. But this September, bloom reports came in from Glenora Point in Yates County, Glen Eldridge Creek in Burdett and at the lake’s southern tip in Watkins Glen.

— Cayuga. Of 62 blooms reported, all but nine were tested and confirmed. 17 blooms were “confirmed with high toxins,” 14 in August and three more in September. The Community Science Institute classifies any bloom as “high toxin” when its microcystin concentration registers above the contamination limit for contact recreation such as swimming (4 ug/L). The DEC definition of “high toxin” is five times higher, though the agency does not highlight on its interactive map the blooms that qualify. The 17 “high toxin” blooms on Cayuga ranged in concentration from 28.87 ug/L to more than 750 ug/L, and most occurred at the northern end of the lake.

— Owasco. 30 Suspicious or confirmed blooms, including nine suspected blooms in the first week of September.  The towns of Auburn and Owasco draw their raw water from the lake. They have been pressing the state DOH for more detail on HAB testing. The DOH once reported microcystin levels in finished drinking water down to 0.15 ug/L, auburnpub.com reported.

Now private labs are not allowed to disclose readings below 0.30 ug/L, with any other findings reported as “less than 0.3 parts per billion.” According to the DOH, the change in policy was driven by margin of error: it is difficult to obtain precise measurements between 0.15-0.3 ug/L. Even so, the Auburn City Council has expressed a desire for more specific data between the range. It has reasons for concern. In 2016, algal toxins showed up in the finished drinking water for about half of Cayuga County, the Auburn Citizen reported. That prompted the installation of a granular activated carbon filtering system for the Town of Owasco in 2017.

— Skaneateles. 10 HABs reports, all in September, included five suspected blooms and five confirmed blooms. The lake provides drinking water for the City of Syracuse, and the villages of Skaneateles, Jordan and Elbridge. Last week the Skaneateles Lake Association sent a bulletin to its members that reported a large bloom off Thayer Park in the Village of Skaneateles. A preliminary sample indicated the presence of microcystins, the bulletin said. Tests this month have not registered toxins in any finished drinking water or even the raw water near the systems’ intake pipes in the lake.

— Otisco. Four blooms are shown on the DEC’s interactive map.Two suspected blooms were reported in June, at the dawn of the HABs season, but they were not confirmed. Two reports in August were confirmed blooms. Otisco Lake, the easternmost of the Finger Lakes, is about 15 miles south southwest of Syracuse. It is 5.4 miles long. 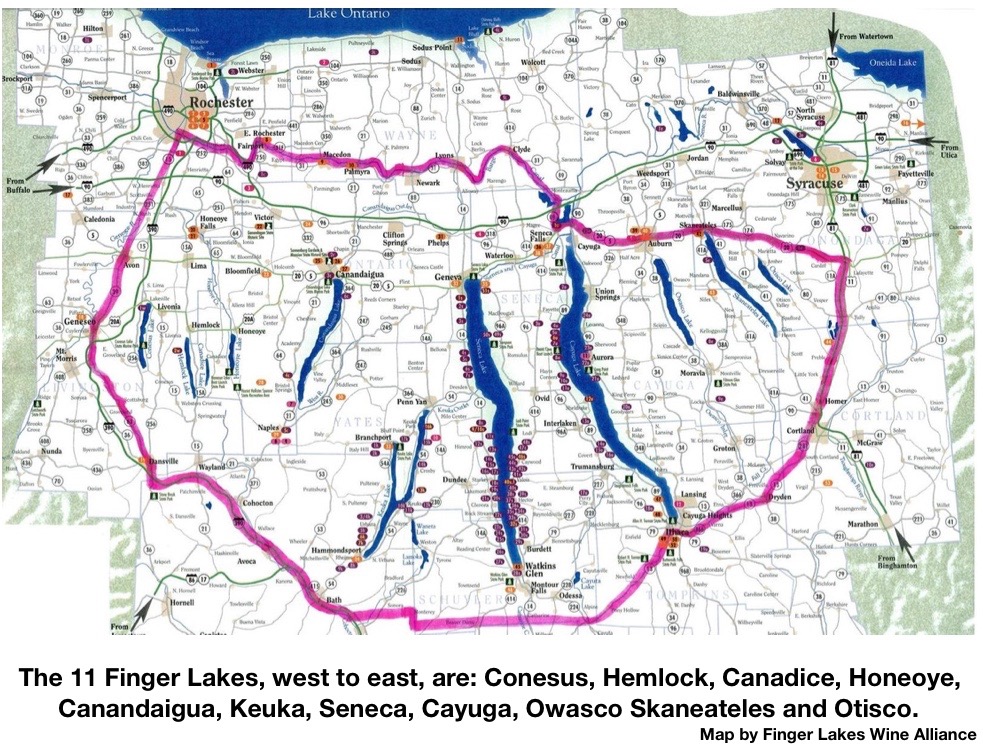