DRESDEN, Nov. 1, 2018 — Since its restart in the Spring of 2017, the Greenidge Generation power station has been skirting federal law governing its use of cooling waters drawn from Seneca Lake.

The Clean Water Act requires electric power plants to recycle or filter the tens of millions of gallons of water used daily to cool their condensers. Greenidge does neither, and the Cuomo Administration says it doesn’t have to correct problem until Oct. 1, 2022. 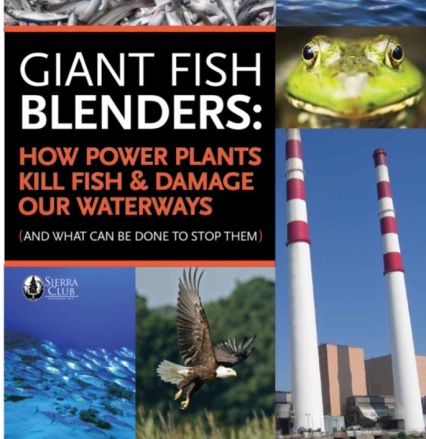 In contrast, a power plant on Cayuga Lake recently spent millions of dollars to install a massive array of intake filters to comply with the law, which aims to protect fish and other aquatic life.

“A single power plant can obliterate billions of fish eggs and larvae and millions of adult fish in a single year, and the heated water it discharges also alters surrounding ecosystems, compounding the damage,” the Sierra Club said in a 2011 nationwide study that preceded new federal rules for cooling water recycling.

“The death toll of wildlife from power plant intakes is staggeringly high.”

Judith Enck, a former regional head of the U.S. Environmental Protection Agency, said there was no excuse for the state Department of Environmental Conservation to allow long-term noncompliance with major environmental laws.

“Where are the DEC fishery biologists on this?” Enck said. “They should be explaining the importance of fully regulating these water intakes.

“It is imperative that the DEC step in and stop this damage to fish and other aquatic species. And if the DEC does not step in, EPA clearly has the legal authority to do so.”

The Dresden power plant had operated for decades as a coal-fired plant before it was shut down in 2011. Atlas Holdings, a private equity firm based in Greenwich, Conn., bought the facility in 2014 with a plan to convert it to run on natural gas.

In order to obtain operating permits from the DEC, the plant had to address two major environmental obstacles: intake pipes for its once-through water cooling system lacked filters and an ash landfill adjacent to the plant was illegally discharging leachate into Keuka Lake Outlet.

In August 2015, the DEC announced a decision that made Atlas’ task easier, faster and cheaper. It ruled that the plant’s owners could skip a full environmental impact statement on the grounds that — in the DEC’s words — the restart “will not have an adverse environmental impact.”

That agency decision, amended slightly in July 2016, rankled neighbors of the plant and triggered a pair of lawsuits.

State law requires an EIS whenever a project has “potentially significant environmental impacts,” and it encourages public participation in the analysis.

In Greenidge’s case, the DEC opted for a more cursory environmental assessment that effectively excluded the public and narrowed the scope of issues.

For example, after the agency categorically dismissed noise as a concern, Dresden residents were sufficiently disturbed by loud screeching sounds that they purchased a decibel meter to measure them and complained to plant officials.

Furthermore, the DEC assessment never mentioned the plant’s potential contribution — through its massive warm water discharges — to a rapidly spreading toxic algae crisis that began menacing Seneca Lake in 2015. Nor did it analyze the fish kills that would inevitably result before corrective action was completed on its water intake system.

As for the landfill’s leachate leaks into Keuka Outlet, the DEC dismissed them as irrelevant to the decision to allow the power plant to operate.

So the plant reopened in the spring of 2017. During its first year, it operated one 107-megawatt generating unit for about 158 days.

The DEC had given Greenidge the green light to open even before it issued the plant updated water withdrawal or discharge permits. When those permits were finally issued in late 2017, they granted a five-year grace period to comply with the Clean Water Act.

Several Dresden residents, including some who draw their unsafe-to-drink tap water from the bay near the plant, responded to the restart with sworn affidavits detailing their concerns about its effects on local water quality and fishing.

“I am concerned that high levels of fish mortality resulting from the plant’s operations with no protections against fish impingement and entrainment are having a negative impact on fish populations in the lake, harming the ecology of Seneca Lake, and harming my ability to catch fish in the lake,” wrote Carolyn McAllister, who owns a home on Dresden Bay. 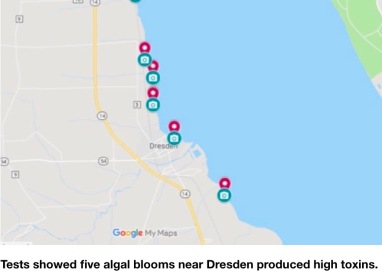 While the causes of blooms are complex and multi-faceted and are not necessarily related to warmed water, Boyer’s warning proved prescient. This summer five blooms in and around Dresden’s bay produced levels of microcystin, a potent nerve and liver toxin, that far exceed the DEC’s threshold for “high toxins.”

The affidavits from Boyer and the Dresden residents were filed in two lawsuits brought by the Sierra Club and others against Greenidge and the DEC. The first case, filed in 2016, challenged the plant’s air quality permits. The second, filed last year, challenged its water withdrawal and discharge permits.

Judge William Kocher has presided over both cases in Yates County Supreme Court. Judge Kocher dismissed the air quality suit, and the Sierra Club has appealed that dismissal. He heard oral arguments in the water permit lawsuit in May, but hasn’t issued a ruling. Kocher’s decision will address a formal court motion filed by the DEC (supported by Greenidge) to strike Boyer’s affidavit from the case record.

While the lawsuits have been working their way through the court system, the DEC has been trying to help Greenidge achieve compliance with both the Clean Water Act and the state’s own standards for power plant water cooling systems.

The federal rules are spelled out in the U.S. Environmental Protection Agency’s 316(b) regulations from 2014, while the state’s “Best Practices Available” (BTA) are described in a 2011 policy memo.

The gold standard BTA — recommended by the Sierra Club and required for new plants — is a system that recycles intake water. Such closed-cycle systems use only about 5 percent of the water withdrawn by a once-through cooling system’s like Greenidge’s, and they cut fish mortality by an estimated 95 percent.

But the state memo says older plants may keep once-through cooling if, though advanced filtering systems, they reduce fish mortality by 90 percent of the mortality reduction achieved by closed-cycle cooling.

Because the DEC waived an environmental impact statement, the public had no input into choice between the primary options: closed-cycle cooling or a sophisticated filter system. Neither has the public had any say on the deadline to install the chosen alternative.

Since Greenidge is permitted to withdraw 139 mgd, a wedge wire system is likely to cost the company several million dollars.

But that future compliance cost was excluded when Greenidge plant manager Dale Irwin said in a June 2018 court affidavit that construction on the Greenidge project was “100 percent complete” in March 2017 at a total cost of $12.9 million.

Costs aside, filtering systems can be challenging to design and install because they must be integrated with pumping systems. 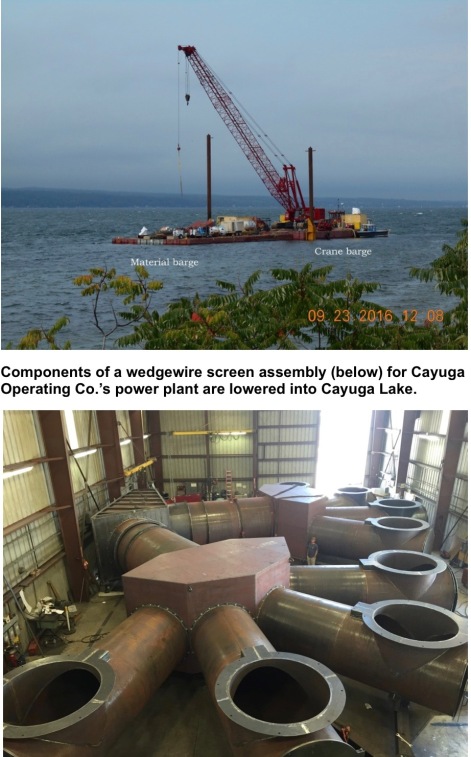 The DEC has imposed an Oct. 1, 2022 deadline for Greenidge to install both the screens and variable speed drives for the pumps. But plant officials have hinted that the timelines established to meet that target may need to be adjusted.

Meanwhile, the Greenidge intake pipes continue to mangle aquatic life in Seneca Lake in violation of the Clean Water Act.

A wooden structure that supports the pipe above water level extends some 600 hundred feet along a shallow shoal where the Seneca Lake water is only about 12 feet deep.

Much deeper water would be required to install a wedge wire screen assembly remotely similar to the system Cayuga Operating Co. uses in Lansing.

That array of fine-slot (0.75 mm) screens weighs more than 50 tons and rests on the bottom of Cayuga Lake in 44 feet of water. As the design engineers describe it, “vertically oriented cylinders are placed on a distributed manifold that equally distributes flow” through each screen unit.

Those engineers produced a silly but instructive cartoon video about how power plants can install filters to comply the Clear Water Act rules.

The DEC has allowed Greenidge to be more casual about compliance than the company depicted in the cartoon.

First, it allowed the plant to restart without requiring an EIS, intake filters or an updated water withdrawal permit.

When it finally issued the withdrawal permit six months later, it allowed Greenidge five  more years — until Oct. 1, 2022 — to install fine-slot (0.50-1.0mm) screens. Even the pilot study for the screens doesn’t begin until next year.

The DEC has also taken a relaxed approach to deadlines related to leachate leaking from Greenidge’s coal ash landfill.

The restarted plant dumps roughly 6,500 tons of ash a year into the landfill, known as Lockwood Hills. That’s small fraction of Lockwood’s waste permit limit and considerably less that the plant dumped when it burned coal.

But untreated contaminated leachate from Lockwood continues to flow north into the Keuka Outlet, which empties into Seneca Lake.

Under the terms of a 2015 consent agreement with the DEC, Lockwood agreed to a complete cleanup of its leachate discharges by Oct. 1, 2016. That cleanup hasn’t happened yet, and the deadline has been pushed back twice to Nov. 1, 2019.

Yet Greenidge’s latest proposed solution to the problem — a “constructed wetlands treatment system” — faces several obstacles that pose new threats to the deadline, according to the DEC.

“The (DEC) is not confident that such a system will be in place and fully operational by the deadline of November 1, 2019 as required under the Consent Order (as revised July 10, 2017),” the DEC’s Gregory MacLean wrote in a recent letter to Greenidge’s engineers.

“No further extensions to this deadline will be granted due to timeframes required of one treatment method over another,” MacLean continued in his July 19 letter. “As such, plans must be provided for an alternate and more expedient/readily-implementable treatment method (such as the use of holding tank(s) and hauling to a permitted POTW) that will be operational and in use no later than November 1, 2019.”

While the DEC and Greenidge wrangle over whether that deadline is enforced or extended once again, the leachate continues to leak into Keuka Outlet.

The DEC said today that Greenidge is on schedule to meet both the October 2022 deadline for wedge wire screens and the November 2019 deadline to address the leachate.

The agency defended its permitting decisions in a court brief filed in July that argues for dismissal of the appeal in the first Sierra Club lawsuit. Greenidge also filed a brief requesting dismissal.

Irwin did not return phone calls. The EPA did not respond to an email request to speak with an impingement/entrainment expert.