GENEVA, May 30, 2018 — Backers of a proposal to build the state’s largest trash incinerator in Romulus have filed suit against the Town of Romulus and its Zoning Board of Appeals in a bid to overturn their recent local zoning decisions aimed at blocking its construction. 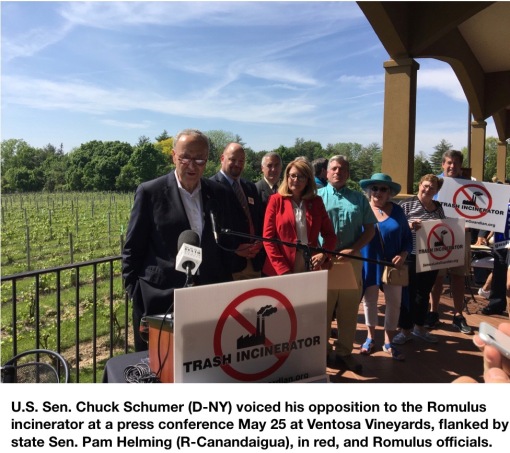 The Article 78 lawsuit, filed Tuesday in the Supreme Court of Seneca County by Circular enerG LLC and Seneca Depot LLC, comes only days after Gov. Andrew Cuomo and U.S. Sen. Chuck Schumer separately announced their opposition to the $365 million project, which would truck municipal waste from New York City.

The incinerator project is also the target of pending bills in the state Assembly and Senate which would exclude trash incinerators from the Public Service Commission’s Article 10 permitting process.

The 22-page complaint confirms that Circular enerG, a Rochester-based startup with no experience in either power generation or municipal waste, isn’t giving up in the face of election year political pronouncements.

The startup company is asking the court to vacate an April 26 resolution by the “Town of Romulus Zoning Board of Appeals” that overturned a Romulus zoning officer’s legal interpretation that the waste incinerator would produce renewable energy and would not be “noxious or injurious” if it followed regulations.

The interpretation had been spelled out by Adam Schrader in two 2017 letters drafted by Alan Knauf, Circular enerG’s attorney. They weren’t widely known to all relevant local officials until after the company unveiled its plans to the public in November.

The validity of the Schrader letters was challenged by Alan Kiehle, a Romulus resident who filed a formal appeal Feb. 1. That appeal was granted by the ZBA and was the basis for its April 26 resolution.

Initially, several key local officials said they would keep an open mind about the project. But in the face of overwhelming opposition from Romulus residents, winery interests and public officials in neighboring towns and counties, they turned against the company’s bid for local zoning approval.

When Circular enerG saw its local options closing earlier this year, it opted instead to seek permits from a power plant siting board the operates under Article 10 of state public service law. The siting board has the authority to waive local objections that it deems unduly onerous.

Cuomo waded into the fray May 15 by issuing a statement denouncing the project as wrong for the Finger Lakes.

He had been criticized only days earlier by Cynthia Nixon, his leading challenger for the Democratic nomination for governor, for his failure to take a stand on the incinerator plan. She taunted him at a press conference in Geneva, saying California Gov. Jerry Brown would never allow such a facility in Napa Valley, his state’s premier wine region. 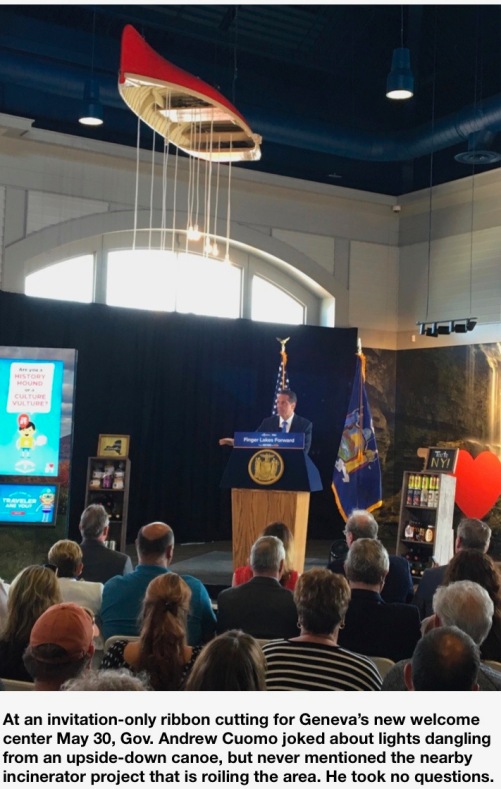 Cuomo was silent on the incinerator controversy at a Geneva ribbon cutting today for the town’s new welcome center on the shore of Seneca Lake. He did not take questions from the media.

Asked why he thought the incinerator project stood a chance in the face of Cuomo’s strong opposition, Knauf said, his attitude might quickly change after the election in November.

Knauf said Schumer was merely “piling on” when he declared his opposition to the project at a press conference at May 25.

Schumer said the plant would be “a danger to the health and a dagger to the heart of this wonderful economy” in the Finger Lakes.

Knauf said Schumer was off base when he said the plant’s smokestack would spew dangerous chemicals that would carry across the region. He said the Circular enerG facility would be cleaner than any of the state’s other 10 trash incinerators, and that it would have to comply with federal and state air emissions standards.

“If he doesn’t think they’re strict enough, he should do something about it,” Knauf said of Schumer. “You’re the U.S. Senator. There are four waste-to-energy plants on Long Island, we’re you’re from. Why don’t you do something about those?”

The bill in the state Senate is sponsored by Sen. Pam Helming (R-Canandaigua), who represents Romulus.

She said in an interview at the Schumer press conference that she gives her bill a 50-50 chance of being signed into law. The biggest obstacle, she said, were amendments added to the Assembly version of the bill that might build opposition to her narrowly tailored goal.

Judith Enck, a former U.S. Environmental Protection Agency supervisor for New York and New Jersey and backer of Nixon, she thought the Circular enerG might inspire the state Legislature to act.

Enck noted that the time window for passing an anti-incinerator bill is small because the Legislature is expected to adjourn in less than three weeks. But since most legislation is passed in the final week each year, there’s still time for the bill’s supporters to rally statewide support.

“This is a private company trying to force a local community to accept something it doesn’t want,” Enck said in an interview. “They’re picking on a small community, trying to intimidate. No one likes a bully.”