Over the nine months leading up to the public unveiling of plans to build the state’s largest waste incinerator in Romulus, a lawyer for the developer worked tirelessly to get the plant classified as a “renewable energy” project before the public knew enough to object. 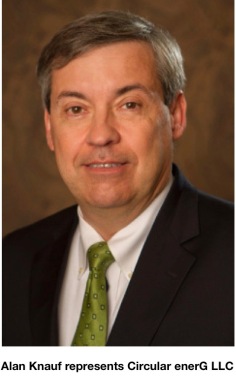 The state doesn’t recognize energy from trash-burning incinerators as “renewable,” so it was not a particularly easy sell for Rochester attorney Alan Knauf.
But internal emails show that Romulus Town attorney Patrick Morrell and other town officials repeatedly deferred to Knauf’s assertiveness on behalf of his client, Circular enerG LLC, a freshly-minted company with no experience in waste disposal or energy generation.
The fruits of Knauf’s labor were two letters signed by the town’s zoning officer that provided the interpretation that Circular EnerG’s $365 million plant would be classified as “renewable energy production — utility scale.”
Knauf now claims those letters are binding on the Romulus Planning Board, even though certain board members were kept in the dark about the two letters and the plans for the incinerator. He has argued that the “renewable” designation guarantees his client’s project is allowed if it obtains a special use permit.
But even if Knauf claims victory in the battle for the “renewable” label, he may have lost the war for local public support for his client’s project.

On Jan. 8, the Planning Board voted unanimously to draft a letter stating that the
the project is not “renewable” and is not an allowed use under the zoning code.
Meanwhile, Romulus Town Supervisor Dave Kaiser and other key local officials have said they oppose the project. Several neighboring towns, including Geneva, have passed resolutions against it.
Permitting for the massive plant and its 260-foot smokestack is now in the hands of the Board on Electric Generation Siting and the Environment under Article 10 of the state Public Service Law. It’s not clear yet how much weight that panel will eventually give the “renewable” label Knauf extracted — or even if widespread local opposition will be a decisive factor.
The battle to win permits for the massive plant is likely to drag on for many months, if not years, and it will bring in a whole new set of players. The courts may well have the final say.
So how did it Circular enerG come to obtain its “renewable” letters, dated March 16 and August 28?

Interviews and emails obtained under a Freedom of Information request filed by Mary Anne Kowalski of Romulus shed light on the backroom maneuvering that made them possible — all while keeping many local officials out of the loop.
Knauf drafted the first letter, word-for-word, and left a place for the zoning officer, Adam Schrader, to sign above his printed name.
Schrader told me in a recent interview that he can’t remember signing it.
“I do not recall signing the original document,” Schrader said. “I also don’t have any record or history of being asked to sign it.”

Emails show that Knauf on Feb. 20 sent a draft of the March 16 letter to Morrell with the note: “Here is the proposed interpretation my client Mike Palumbo would like to get from the town…”
Morrell’s town legal bills show that over the next two weeks he received phone calls from Town Supervisor Kaiser and Knauf labeled “Re:Flaum.” Flaum Management is Palumbo’s company, and Knauf has acknowledged that it is affiliated with Circular enerG.

On March 10, Morrell emailed Knauf: “I have reviewed your proposed interpretation letter and the town’s zoning ordinance. I am forwarding the letter to the town’s supervisor and recommending that the town’s zoning officer sign and distribute the letter as it has been presented.”
On March 22, a town clerk sent emails with copies of the signed letter to Palumbo and Schrader. The copy to Schrader included the note: “For your file.”
A month later, Knauf emailed Morrell to say that he wanted the town to officially publish the interpretation attributed to Schrader. “We want you to publish the public notice for us, which we have drafted. While we can do this on our own, it would be more appropriate for the town to do so.” 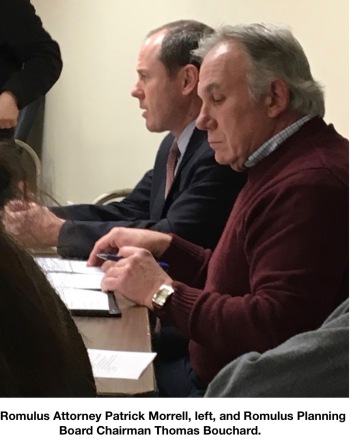 On May 5, Morrell effectively declined, emailing Knauf: “Let me know if you have any problems publishing this notice.” The May 10 notice in the Ovid Gazette noted the zoning officer’s interpretation of “renewable” but did not mention plans for a massive incinerator (or that the interpretation was written by a sponsor of the project).
Knauf would later claim that the clock began running May 10 on a 60-day window for the public to appeal the new interpretation of “renewable.”
On June 3, Knauf emailed Morrell with more details about plans for the incinerator, writing: “Here is a powerpoint showing the plant we would build. It is already built in China. Please keep this confidential.”

Attachments to several emails Knauf sent to Morrell that day included a powerpoint on a Chinese plant and a rendering of that plant labeled “Waste Incineration Power Plant.” 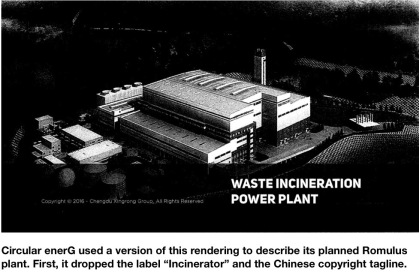 Circular enerG later used a version of the same rendering in documents it made public, though only after eliminating the label “Incineration” and the 2016 copyright line: “Chengdu Zingrong Group. All Rights Reserved.” (Knauf has avoided using the word incinerator. He prefers the term waste-to-energy facility.)
Less than two weeks later, Knauf wrote Morrell to ask that Schrader amend the March 16 letter he signed to clear up possible ambiguity about zoning classifications that could apply at incinerator site. “We request that you ask the zoning officer to adopt this (new) interpretation,” Knauf wrote. 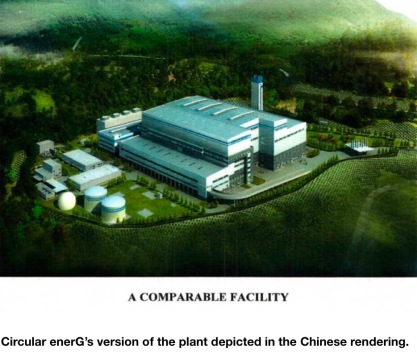 Morrell once again used Knauf’s language word-for-word to prepare a second letter to amend the first, although he did add the final sentence: “Further, in addition to compliance with applicable environmental regulations noted above, all uses within the WITE and IW Districts are subject to the performance standards contained in Article IV, Section 3” of the town zoning code.
On August 10, Morrell emailed a draft of the second letter to Town Supervisor Kaiser with a copies to Thomas Bouchard, chairman of the Romulus Planning Board, and the town clerk. The email asked Kaiser to “forward the attached letter to the town’s zoning officer for his signature.”
Schrader apparently needed further prodding. On August 28, a town clerk emailed him a reminder to sign the second letter as instructed. If he had questions about it, he was urged to call “Dave (Kaiser) or the attorney (Morrell).”
Schrader said in an interview he used an auto-signer for his signature on the second letter. The signature does not resemble the signature on the first letter.
This past summer, Schrader was in the process of buying a house in Alpine, 35 miles south of Romulus, and selling a Romulus home he had purchased in 2012.
The wide gap in the $305,000 purchase price of the Alpine home and the $97,000 sale price of his home in Romulus triggered some public whispers — totally unfounded — that he might have received compensation for signing the two letters that Circular enerG was touting.
The facts don’t support that speculation. Records show Schrader had begun negotiations for the Alpine property in September 2016, four months before Circular enerG was even formed. And the June purchase of the Alpine property had not been not contingent on the sale of his Romulus property two months later.
The Romulus home is located about 3,000 feet from the site of the proposed incinerator. The buyer, Felix Flores, has said he feels Schrader should have disclosed his knowledge of those plans. Schrader said in an interview he did not feel an obligation to do so.
But Schrader said he’d had Flores’ best interests in mind when rejected a higher last-minute offer on his property — which he claims he had a legal right to accept — in order to honor the contract Flores had already agreed to. 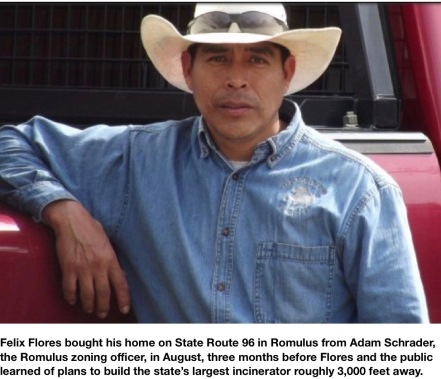 Sue Ellen Balluff, Flores’ real estate agent and a member of the Romulus Planning Board, said she didn’t learn about the incinerator project until the public found out in November. She said that if she had known before the closing of the sale, she would have been required under real estate rules to disclose it to Flores.
Only weeks after the Schrader-Flores sale closed, several Romulus officials were invited to learn more about the incinerator project, according to an August 22 email from Morrell to Knauf.
“I spoke to the Romulus Supervisor (Kaiser) about getting a meeting together,” Morrell wrote the Circular enerG attorney on August 22. “We should be able to get two Town Board members, two Planning Board members, the zoning officer and myself together for a meeting on your project.”

Balluff apparently didn’t make the cut. She said in a recent interview that she opposes the incinerator project. Schrader said he has also turned against the project.
Circular enerG finally went public with its plans in mid-November by announcing that it was seeking a special use permit.
On Nov. 30, Knauf wrote a four-page letter to Morrell that underscored that the two Schrader-signature letters committed the Planning Board to treating his client’s project as a “renewable energy” facility.
On Dec. 12, I asked Knauf about his insistence on his client’s right to the “renewable” designation in light of the fact that the state doesn’t recognize waste incinerators as producers of renewable energy.
“How strong is your claim?” I asked.
“Strong,” Knauf answered. “It’s a strong claim….It’s already been decided. The town’s already ruled that.”
Knauf was also hopeful that the Romulus Planning Board would take the role of lead regulatory agency in the permitting process under the State Environmental Quality Review Act. On Dec. 6, Bouchard wrote the state Department of Environmental Conservation to say it was seeking that role.
Two weeks later the DEC overruled Bouchard’s request, only to be overruled itself by state the Public Service Commission and the power plant siting board.
That siting board’s decision to step in opened a new chapter in the project’s bid for regulatory approval.
On January 5, Circular enerG withdrew its request for a special use permit with the Romulus Planning Board.
In the days that followed, as public opposition at open hearings continued to mount, the Town Board considered one moratorium on Zoning Board Appeals decisions and another on incinerators. The Planning Board voted to disavow the Schrader letters. A few members of the public even called for Morrell and Schrader to be fired. 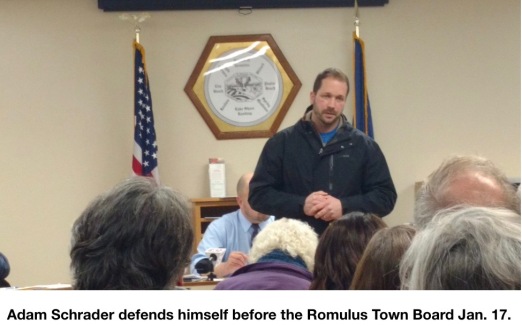 Schrader felt compelled to make his case before the Town Board, stressing that his real estate transactions were totally unrelated to Romulus zoning issues or the incinerator project. He received a generally sympathetic response.
In interviews Jan. 18 and 22, Schrader said he had once had an open mind about the incinerator project but was now opposed, primarily because of the company’s tactics.
Meanwhile, Knauf is sticking to his guns.
In a January 17 letter to Kaiser opposing a proposed moratorium, he wrote: “Circular enerG had a reasonable investment-based expectation to pursue the project, as it was, twice, determined that the project was an allowable use.”