The company that plans to build the state’s largest trash incinerator in the heart of the Finger Lakes doesn’t see a need to prepare a full environmental impact statement for its $365 million project “because we are going to meet all the (permitting) standards,” its Rochester attorney said this week.

The plant would burn trash arriving by truck or rail from near and far, much of it from New York City.
It’s setting in Romulus — midway between Lake Seneca and Lake Cayuga and only 12 miles south of the state’s largest landfill — has drawn opposition on multiple fronts.
Douglas Knipple, president of the Geneva-based Finger Lakes Zero Waste Coalition, an anti-landfill group, said it would be “ridiculous” to proceed with such a massive waste project without public involvement in a full EIS.
“The Finger Lakes is under siege,” Knipple said. “A region can either have agriculture, tourism, education and wine or gas pipelines, trains, trucks, monuments to waste and incinerators. You can’t have both.”

In an interview Nov. 28, Alan Knauf, attorney for Circular enerG LLC, said “real environmentalists who aren’t just NIMBYs” should support his client’s incinerator plan. He touted the environmental advantages of burning trash rather than piling it in towering landfills that stink and produce methane, a potent greenhouse gas.
Steve Churchill, chairman of the environmental committee of the Seneca County Board of Supervisors, conceded his point, but added: “Incineration may be better technology than landfilling, so build it — but build it down near New York City where the waste is.”
Churchill’s committee voted 4-0 this week for a law banning new waste facilities such as the incinerator in Seneca County. But even if the full county board were to pass the law, the town of Romulus could override it. Still, the committee’s action reflects local resistance to the mysteriously-backed project.
Knauf declined to name the players behind Circular enerG, which was formed in January and has no track record. And he said it was too early to say who might build or operate the facility. Costich Engineering in Rochester and Daigler Engineering in Buffalo have been involved in the early stages.

Knauf said his initial goal to file Circular enerG’s applications for state permits by yearend was probably too optimistic, given the complexity of air quality issues.
Meanwhile, the Town of Romulus Planning Board is scheduled to consider a special permit for the project at a meeting on Monday, Dec. 4 (7p.m. at the Romulus Firehouse 2010 Cayuga St. Romulus).
The plant and its 260-foot smokestack would be built on a 48-acre tract at the former Seneca Army Depot. Knauf said the site is owned by Seneca Depot LLC, which shares a Rochester address with Circular enerG, Rochester developer David M. Flaum and Top Capital of New York.
Flaum is “a partner in Seneca Depot LLC,” and therefore “the landlord or the seller,” Knauf added.
Circular enerG’s incorporation papers don’t list owners, directors or investors. Knauf said the company is “affiliated with” Top Capital, though not a subsidiary. “The companies have a couple of principals in common,” Knauf said, declining to elaborate.
Top Capital’s founder, Zheng “Gene” Zhou, said in a press release in July that he and his business partners were “investing more than $200M in a ‘circular economy’ project that will create energy from trash …”

The contact spokesperson for Zhou on that release, Jamie Frumusa, did not respond to emailed questions about the Romulus project or about Top Capital’s reported use of a controversial “golden visa” program to raise investment capital.
Under that federal EB-5 program, foreigners can obtain visas in exchange for investing $500,000-$1 million in projects that create U.S. jobs. Almost 90% of “golden visa” investors are from China, as is Zhou, a naturalized U.S. citizen.
In January 2016 press release, Top Capital had touted its plans to draw on EB-5 investments and said it had used them in financing its Heritage Square assisted living complex in Brockport. 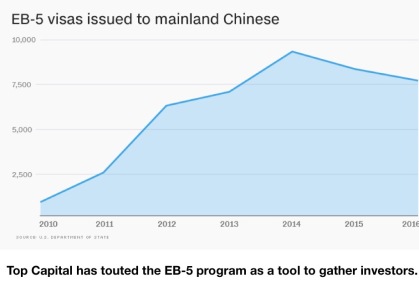 But early this year, Sens. Diane Feinstein (D-Cal.) and Chuck Grassley (R-Iowa) introduced legislation to kill the 27-year-old program.
“The EB-5 program has been rife with fraud and national security weaknesses,” Grassley said. “It has also strayed from Congress’ original intent to spur economic development in rural and depressed areas.”
Asked if EB-5 investments could be used to help fund the Romulus incinerator, Knauf said: “There is no way. They would not be doing that.”
The Romulus facility would be designed to burn up to 2,640 tons of trash a day, or nearly half the limit allowed at the state’s largest landfill, Seneca Meadows Inc., 12 miles to the north, between Waterloo and Seneca Falls. (The state’s second and third largest landfills, High Acres in Fairport and the Ontario County in Stanley, are also within 50 miles of Romulus).
An executive summary produced by Circular enerG says that as many as 176 waste-hauling trucks would arrive at the incinerator each day, along with 62 other trucks carrying ash, scrap metals and other materials. If rail service to the plant is arranged as planned, up to 30 railcars a day would greatly reduce that truck traffic.
The executive summary’s analysis of the project’s greenhouse gas effects assumes “an average distance of 254 miles” between the source of the trash and the Romulus incinerator. That’s the distance to New York City. 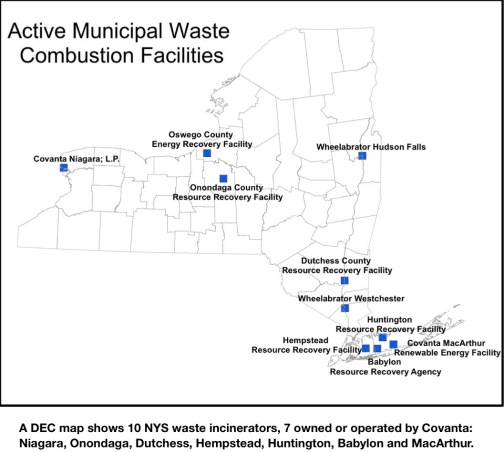 New York State already has 10 waste-burning incinerators, including seven that are owned or operated by Covanta, a publicly-traded waste company based in Morristown, N.J., according to a February report from the state Department of Environmental Conservation and a list complied by Harvard University.
Four of Covanta’s New York plants are located on Long Island, including the largest: Covanta Hempstead in Westbury. That plant has 82 employees and is designed to accept 2,505 tons of trash per day. It has three boilers and produces up to 72 megawatts of power.
The Romulus plant would have a slightly larger trash-burning capacity and roughly the same number of employees. It would run four boilers and produce up to 50 megawatts of power.
The state’s other nine waste incinerators have waste capacities ranging from 200 tons per day in Oswego to 2,250 tons daily in both Peekskill and Niagara Falls. They generate between 4 and 60 megawatts of power and employ between 28 and 87 employees.
Proponents of waste-to-energy technology argue that the U.S. lags far behind Europe and Japan in reducing landfilling through recycling and waste incineration.
For example, the five European nations with the highest recycling rates (Germany, the Netherlands, Austria, Belgium and Sweden) are among the biggest fans of waste incineration, according to a 2013 report in Ensia, a non-profit magazine that reports on worldwide environmental issues. 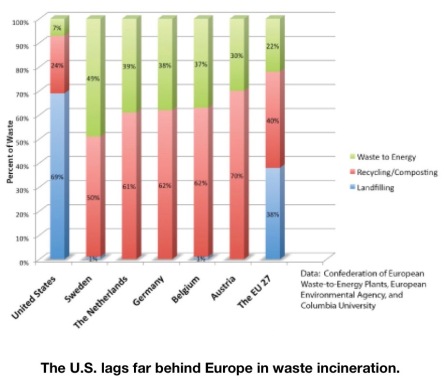 In fact, that study said the 27 countries in the European Union burn 22% of their total waste while sending 38% to landfills. It said the U.S. burns only 7% while sending 69% to landfills. The most extreme European case, Sweden, burns 49% of its waste, recycles 50% and sends only 1% to landfills.
The Ensia report scolds U.S. environmental groups for stifling development of waste incineration and — by default — encouraging landfilling.
For at least the past six years, Covanta has been lobbying — unsuccessfully, so far —to have its so-called “waste-to-energy” plants included within the state’s Renewable Energy Portfolio now made up primarily of wind, solar and hydro. Eligibility on the renewables list could open up opportunities for the refuse incinerators to win special subsidies. But environmental groups have protested Covanta’s push, arguing that waste-to-energy plants pollute the air and including them would suck incentive funding away from more traditional renewables.

Like Covanta, Circular enerG has gone out of its way to stress its potential green attributes, at least compared to landfilling trash.
“The facility will improve environmental quality and reduce the carbon footprint from waste generation,” the company says in its executive summary. “…This will result in a savings of about 168,485 tons per year of carbon dioxide equivalent compared to landfilling.”
Circular enerG said the Town of Romulus, population 4,316, “has already determined that a waste-to-energy facility constitutes “renewable energy production.” It said it hopes to negotiate a host agreement with the town before yearend.
Knauf said his client would prefer to see the town act as lead regulatory agency for the project instead of the state Department of Environmental Conservation.
Whoever takes the lead — the town or the DEC — will decide whether to require a full environmental impact statement with public hearings and comments.
The alternative favored by Circular enerG would be a less rigorous environmental assessment process that requires little or no public input. That “perfunctory” process is unsatisfactory because it would squelch concerns of the wine industry in particular on regional truck and train traffic as well as air pollution, Knipple said.
Several major waste incinerators around the country have stirred controversy over air quality.
For example, a Wheelabrator facility in Baltimore, which features a 315-foot smokestack emblazoned with the city’s name just off Interstate 95, reportedly has been a major emitter of smog-producing nitrogen oxide.
“They produce more NOx than coal-fired plants for the amount of energy generated,” a lawyer for the Environmental Integrity Project in Washington told the Baltimore Sun newspaper.
Another group based in Berkeley, Calif., the Global Alliance for Incinerator Alternatives, blasted incinerator subsidies in its 2011 report “Burning Public Money for Dirty Energy: Misdirected Subsidies for ‘Waste-to-Energy’ Incinerators.”
In New York, Covanta Hemstead was cited in a March 2017 report by the State Comptroller as the state’s fifth largest recipient of net tax exemptions from local Industrial Development Authorities in 2015. 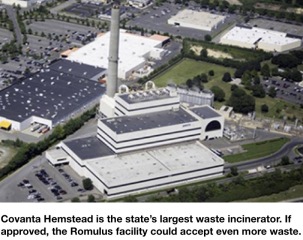 The report showed that the $296 million Covanta project obtained $15.8 million in tax exemptions that year, with no offsetting payments in lieu of taxes (PILOTs). That represented 2.3% of the total $694.7 million in IDA-awarded tax breaks to 4,484 projects statewide in 2015.
Meanwhile, a DEC air quality permit review report from July 2016 described Covanta Hemstead’s ozone release performance as “severe non-attainment.”
Four of New York’s 10 other active trash incinerators have been operating with expired air quality permits, according to the February 2017 DEC list.