Scientists widely agree that warm water is a key fuel for toxic cyanobacteria, the super-dangerous algae look-alike.
But even after the most intense season of cyanobacteria outbreaks ever recorded in the Finger Lakes, there’s no consensus on what to do about the electric power plants that dump hundreds of millions of gallons of hot water a day into lakes stricken this September.

— Seneca Lake must absorb up to 190 million gallons a day at temperatures up to 108 degrees from Greenidge Generation in Dresden.
— Cayuga Lake has to receive up to 243 million gallons a day of heated water from AES Cayuga north of Lansing.
— Lake Ontario must accept well over a billion gallons a day of hot water from a combination of three New York nuclear plants operated by Exelon Corp. — FitzPatrick and Nine Mile near Oswego and RE Ginna near Rochester.
Any of the five power plants could reduce their discharges by 15-20 times if they adopted the “best technology available” for power plant condenser cooling,
as described a state policy memo published in 2011.
But their antiquated, water-wasting “once-through” cooling systems are grandfathered. Requiring conversions to “closed-cycle” systems that recirculate cooling water would be a political challenge that the state Department of Environmental Conservation has shown no interest in tackling.

The will to act might be stronger if the science were more clear. Experts are still puzzled about the way several factors interact to trigger cyanobacteria outbreaks, which the DEC refers to as harmful algal blooms, or HABs.
Water temperature matters, but simply warming lake water doesn’t automatically cause a bloom. Other factors, including nutrient-rich water (with ample phosphorus and nitrogen), sunlight and calm conditions are at least as important. They all seem to work in complex, dimly-understood combination.
But enough is known that biochemist Gregory Boyer of SUNY-ESF in Syracuse, perhaps the region’s leading HABs expert, warned in a sworn affidavit in January against starting up the Greenidge power plant with once-though cooling, writing: 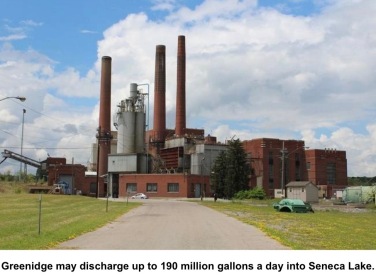 “Increasing water temperatures in the Dresden bay area of Seneca Lake could result in increased HABs outbreaks in that area and … this issue deserves further study before (starting the plant).”
In court, the DEC fought to have Boyer’s affidavit “excluded” and to block efforts to require a full environmental impact statement for the Greenidge plant.
Together, the plant and the agency won a lawsuit brought by the Sierra Club and others seeking to force an EIS, and Greenidge was allowed to start up in the Spring.
HABs were first reported on Seneca Lake in 2015, and a few returned in 2016, including one near Dresden. This year all was calm on the HABs front until Sept. 14, when all hell began to break lose.

During the following two weeks — characterized by unseasonably warm air temperatures (which warmed the lake water) — dozens of suspected blooms were reported across Seneca, particularly in the lake’s shallower north end.
Laboratory tests showed that at least two dozen Seneca sites had cyanobacteria with high levels of toxins, usually microcystins. The five sites with the highest toxins were all 4-10 miles from the point where Greenidge discharge waters flow into the lake.
“No one thing will generate a bloom by itself,” Boyer said in a recent email. “It is not unexpected that you would not get a HAB near Dresden if the water column stability, nutrient levels and sunlight were not in the right spot to support it.”
But he added that “warm water at Dresden could easily impact other parts of the lake.”
That’s less true for Lake Ontario because of its gigantic size, Boyer said. But shorelines and harbors like Sodus Bay — midway between the FitzPatrick and Ginna nuclear plants — are particularly vulnerable. 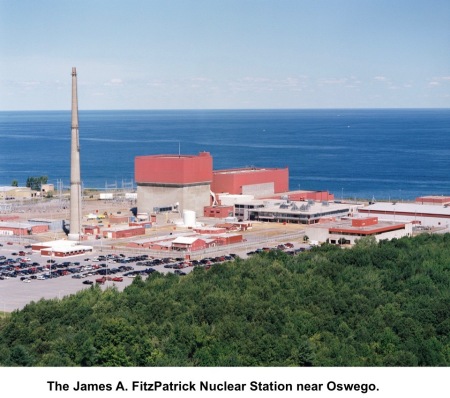 The FitzPatrick nuclear plant in Oswego is applying to the DEC to withdraw 787 million gallons a day from Lake Ontario, mostly to transfer heat from its condensers into the lake. Under its discharge permit, which expired in 2013, it can discharge water at temperatures up to 112 degrees, DEC records show.
About half a mile away, the Nine Mile nuclear plant is authorized to discharge up to 417 million gallons a day at temperatures up to 115 degrees.
The Ginna nuclear plant just east of Rochester is authorized to release up to 520 million gallons a day at up to 106 degrees.
This year HABs were reported at Wescott Beach about 20 miles northeast of the twin Oswego plants. In 2010, a cyanobacteria bloom in Sodus Bay forced beaches to close, triggering hotel cancellations that have reportedly stigmatized area tourism ever since.
On Lake Cayuga, AES Cayuga is authorized to release up to 245 million gallons a day at temperatures of up to 98 degrees under a state discharge permit that expired in 2014. (The DEC often allows companies to operate under expired permits if they have filed valid applications to renew.)
The frequency of the HABs reports on Cayuga this summer were unprecedented. Several beaches were forced to close for multiple days. High toxins were confirmed at at least one site more than 10 miles north of the power plant.
HABs first hit the national consciousness in the summer of 2014 when an outbreak on Lake Erie forced the city of Toledo to shut off its public water system, affecting 500,000 people. 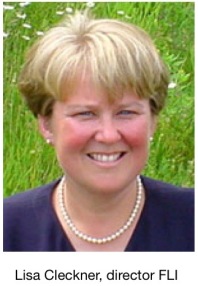 In the Finger lakes, reports of HABs grew steadily between 2012 and 2016, noted Lisa Cleckner, director of the Finger Lakes Institute in Geneva. “Moving forward to 2017, all of a sudden every single Finger Lake had an algal bloom and many had high toxins,” she said.
The most common type of cyanobacteria found in the Finger Lakes this year produces microcystis, a nerve and liver toxin. Exposure to it has been associated in scientific studies with irreversible neurological diseases, including dementia, Alzheimer’s, Parkinson’s and ALS (Lou Gehrig’s disease).
Cyanobacteria blooms often look like green mats of harmless algae, but sometimes they appear as green speckles in calm water. Cyanobacteria are not algae, but the DEC has embraced the misnomer “harmful algal blooms” in an apparent effort to more effectively warn the public.
Direct contact with the toxins from swimming or breathing irritate the skin, eyes, nose and throat.
Dogs in particular are at risk because they are attracted to the toxins’ smell and can be poisoned by grooming after a swim. SUNY-ESF’s Boyer has said he strongly suspects that cyanobacteria caused the sudden death in 2016 of a dog that had been swimming at a Lake Ontario beach near Rochester.
To better document the growing HABs scourge, the DEC has been encouraging Finger Lakes citizens to monitor stretches of lake shoreline and report (with pictures and exact locations) suspected blooms. The most suspicious are sent to Cleckner’s lab in Geneva, Boyer’s lab in Syracuse and a state facility in Albany for tests.
Seneca and Owasco lakes have highly coordinated monitoring networks, but the other lakes lag behind.
The alarming rise in the frequency of HABs with high toxins — due in part to better reporting — has set off alarm bells for the thousands of lakeside property owners who draw water directly from the lakes or from shoreline wells. 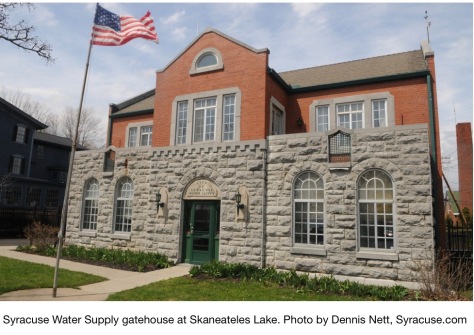 Plus, Rochester, Syracuse and dozens of smaller towns and villages draw their drinking water from the Finger Lakes. Their water treatment plants are being forced into action.
Syracuse, which draws from Skaneateles Lake, and the town of Auburn, which draws from Owasco Lake, detected toxins in their raw water this summer and are weighing measures to prevent it from reaching public drinking water in the future.
Auburn’s tap water was tainted in 2016, but no tap water drawn from a Finger Lake was found to be contaminated this year.
In response to Auburn’s public water crisis last year, the DEC formed the Finger Lakes Water Hub, a team that strives to understand the causes of cyanobacteria blooms in order to take steps to slow down their proliferation.
On its website, the DEC maintains an archive of HABs events in New York since 2012. The website also lists the causes of HABs as: “Excess nutrients (phosphorus and nitrogen), lots of sunlight, low-water or low-flow conditions, calm water, and warm temperatures.”
The agency doesn’t specify whether temperature refers to air or water.
Boyer and John Halfman, a scientist at Hobart and William Smith Colleges in Geneva, have placed more emphasis on water temperature.
“Surface water temperatures above 20 degree Celsius (68 degrees Fahrenheit) are optimal for cyanobacteria to grow,” Boyer wrote. 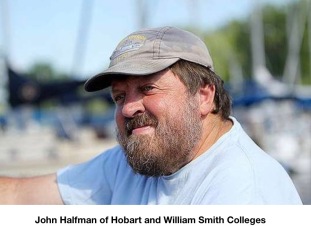 Halfman, an expert on Seneca Lake water conditions who works with the Finger Lakes Institute, said blooms “are believed to prefer … warm water temperatures (60-80 degrees Fahrenheit).”
The DEC’s practice of routinely allowing electric power plants to use once-through cooling (OTC) was already under scrutiny before questions were raised about its potential contribution to the HABs crisis.
The environmental drawbacks of the outdated OTC technology — which involves sucking in vast quantities of lake or ocean water and returning it heated to the same water body — have been debated nationwide for decades.

OTC systems kill millions of fish in various stages of their life cycle — so many that the Sierra Club has nicknamed them “fish blenders.” Once-through cooling systems also harm other plant and animal life and their ecosystems by disrupting normal water temperature patterns.
California is in the process of phasing out OTC as an acceptable cooling option for its power plants. That state prefers to see condenser water cooled in cooling towers or to see the old plants simply close down.

In 2011, after years of contentious debate and foot-dragging, the federal Environmental Protection Agency, issued complex rules for all plants that withdraw more than 2 million gallons a day and use at least a quarter of it for cooling.
That same year, the DEC issued its policy statement, which stated that “closed-cycle cooling or the equivalent (is) the performance goal for the best technology available to minimize environmental impacts.”
Yet once-through cooling is still commonly allowed. That has led to lawsuits against the DEC over its condenser cooling and water withdrawal policies.
In a case now pending in a state appeals court in New York City, the Sierra Club argues that the DEC should have applied conditions to the water withdrawal permit it granted to the East River Generating Station in Manhattan. 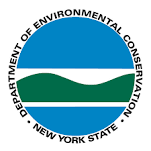 The DEC claims that its hands are tied by the law, which states that the agency “shall issue an initial permit, subject to appropriate terms and conditions as required under this article, … for the maximum [water withdrawal] capacity reported …”
The DEC says the word “shall” is “non-negotiable, it is a command” to issue the withdrawal permit for East River’s previous maximum of 373 million gallons a day.
The Sierra Club counters that granting the permit does not preclude conditions promoting “water conservation measures.”
A state Supreme Court judge sided with the DEC, prompting the Sierra Club’s current appeal. The Sierra Club also appealed the DEC’s lower court victory in the Greenidge case.
The DEC declined to answer a series of emailed questions I posed on whether the industrial use of once-through cooling might promote cyanobacteria blooms. Agency spokeswoman Erica Ringewald cited pending litigation.
But a senior scientist at the DEC recently dismissed the likelihood that power plant hot water discharges could be part of the problem. 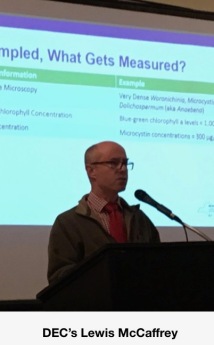 At a public forum on HABs in Geneva Oct. 26, Lewis McCaffrey was asked by a member of the forum audience to comment on the possible effect of Greenidge in particular.
“There’s a really powerful factor that’s heating up the lake in the summer, and that’s obviously the sun,” said McCaffrey, a staff member of the Finger Lakes Water Hub. “So how much (lake water warming caused by) the industrial uses of the lake are compared to the sun heating it up, I really don’t know, but I would probably say it’s insignificant.
“No concerns have been raised to me about the lake being warmed up particularly by those industries.”