A law that requires the state’s largest landfill to close in 2025 is on much firmer ground after two Democrats were easily elected Nov. 7 to the five-member Seneca Falls Town Board.

supporters of Local Law 3, which set the mandatory closing date for Seneca Meadows Inc. They defeated Republicans Tom Ruzicka and Steve Turkett, who had opposed it. Local pre-election mailings with the Seneca Meadows’ logo warned that retaining the law would trigger a 300% tax increase. The flyers didn’t name candidates.
After the election results were clear, Town Supervisor Greg Lazzaro said he would no longer pursue efforts to repeal Local Law 3. “Elections have consequences,” Lazzaro said at a FingerLakes1.com Election Night Special.
Lazzaro and incumbent Lou Ferrara had voted in May to rescind the law, but a state Supreme Court Judge reinstated it, leaving the measure’s fate in the hands of voters. The board’s fifth member, Vic Porretta, has supported the law. 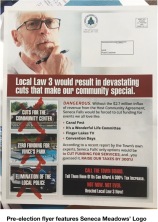 DeLelys said in an interview Thursday that the new board must now wrestle with budget issues and a possible local property tax hike. He said he would oppose Lazzaro’s “crazy” proposed rate increase from $3.61 to $6.09 per $1,000 in assessed value, which DeLelys interpreted as a tactic coordinated with the landfill flyers aimed at scaring voters.
“The landfill flyers almost seemed to have backfired on them,” DeLelys said. “People are wising up, I think.”

Meanwhile, at the other end of Seneca Lake, the Cuomo Administration is edging closer to a final decision on an eight-year-old application for a state permit to store liquefied petroleum gas, or LPG, in unlined salt caverns 2.5 miles north of Watkins Glen.
An administrative law judge who’s had charge of the case since early 2015 wrapped up his work Nov. 6 and the voluminous case record is now complete.

Final appeals are due Nov. 15, and answers to those appeals are due Dec. 15.
A final ruling that either approves or denies a storage permit could come by yearend from Gov. Andrew Cuomo’s top environmental regulator, Basil Seggos.
Houston-based Crestwood Equity Partners LP seeks permission to store highly explosive liquid propane in geologically fragile caverns on its U.S. Salt property in the town of Reading, just north of Watkins Glen.
On Oct. 31, Crestwood announced an agreement to sell the salt refining operation at U.S. Salt to the Kissner Group, a midwestern salt company. Crestwood later said the deal excludes the caverns and property needed to continue its existing natural gas storage and to develop LPG storage.
The LPG permit application, filed by predecessor company in 2009, flew under the public radar for more than a year before erupting into the hottest environmental controversy in the Finger Lakes region since fracking was banned statewide in 2014. 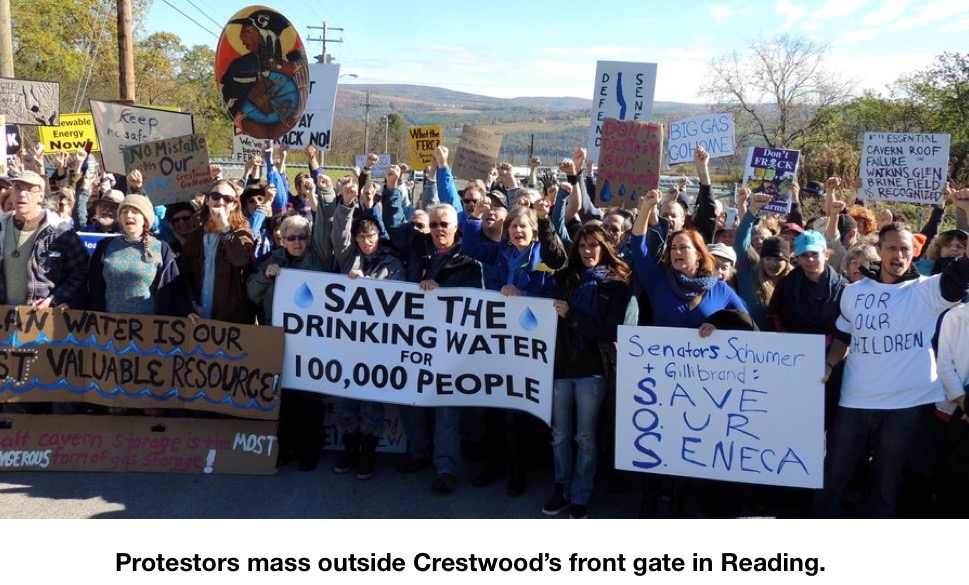 Several hundred anti-LPG protestors have been arrested for trespassing at the Crestwood property, and hundreds of winery and tourism businesses have lined up in opposition.
Wine industry leaders — fearing that a catastrophic cavern breach could damage the Finger Lakes’ reputation as an up-and-coming wine region — have made repeated trips to Albany to lobby Cuomo and Seggos.
On their latest trip to the capital on Nov. 1 they argued that the project was both dangerous and unnecessary. They pointed to Crestwood’s new propane rail terminal in the Hudson Valley, which the company recently described as “sufficient to serve the entire northeast in the coldest winter.” And they noted recent permits Crestwood has obtained to expand LPG storage in Savona, less than 25 miles from the U.S. Salt site.
The staff of the state Department of Environmental Conservation recently urged James McClymonds, the administrative law judge, to exclude information on the new rail depot and the Savona expansion from the record in Crestwood’s case. 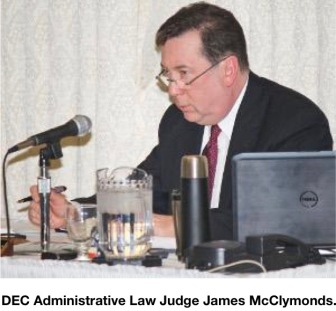 But in his Nov. 6 ruling, McClymonds chose to include it for Seggos and Cuomo because the law requires consideration of both “the ‘no action’ alternative” to granting the permit and the project’s “purpose, public need and benefits.”
McClymonds has ordered the DEC staff to rework its 2014 draft LPG storage permit  to address a series of changes to the original plan, including the pending sale of U.S. Salt.
Crestwood, through its Finger Lakes LPG Storage subsidiary, has scaled back its original plan, eliminating a proposed giant brine pond, cancelling a planned truck-rail depot and cutting out liquid butane storage.
But the project has always included the use of brine from the salt refining operation at U.S. Salt. The company has been stingy with details about how that crucial arrangement would work after U.S. Salt is sold.
But McClymonds provided some hints in his Nov. 6 ruling. He noted that U.S.Salt “conveyed by deed” to Finger Lakes LPG Storage the relevant storage caverns in 2011. He added that Crestwood also “asserts that it retains the right to install over U.S. Salt’s property the water, brine, and product pipelines that are part of the (LPG storage) project. Applicant also retains the ability to send brine to and obtain brine from U.S. Salt if needed.”

An emergency stay by a federal appeals court that blocks construction on a Hudson Valley pipeline project adds to the drama of the standoff between Gov. Andrew Cuomo and President Trump over natural gas pipeline development in New York State. 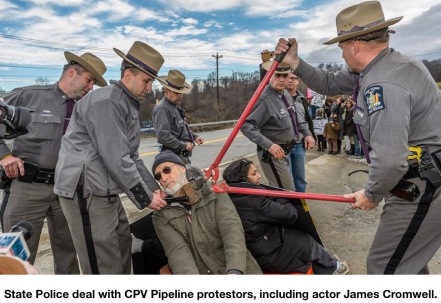 Earlier this year, Cuomo’s Department of Environmental Conservation denied a water quality permit to the Millennium Pipeline for a 7.8-mile spur pipeline to the new Competitive Power Ventures (CPV) power plant in Wawayanda.
But the Federal Energy Regulatory Commission, under its newly Trump-appointed chairman Neil Chatterjee, claimed the DEC’s denial was invalid because it took too long to rule. The DEC asked FERC for a rehearing, noting that a federal appeals court was sympathetic to its argument. 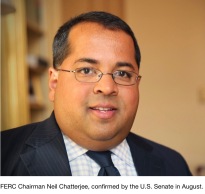 Instead of granting the rehearing, a FERC official issued the a notice to proceed with construction. That action prompted the U.S. Court of Appeals for the Second Circuit in New York to grant the DEC’s request for an emergency stay to block construction, pending resolution of the court dispute. 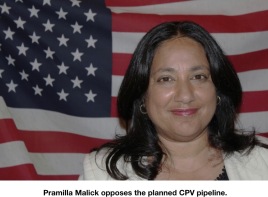 “FERC routinely violates the 14th Amendment rights of citizens,” said activist Pramilla Malick of Protect Orange County, “but this is the first time they’ve ever violated the due process rights of a state.”
The outcome of the CPV case could set a precedent for two other longer projects— the Constitution Pipeline and the Northern Access Pipeline — that have also been denied water quality permits by the DEC — in each case over permit applicants’ failure to adequately review the projects’ impact on climate.